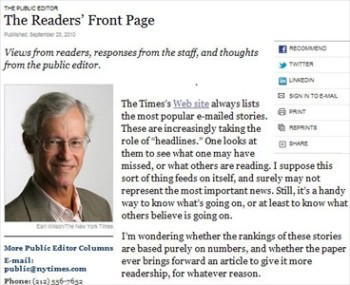 “There are no clear-cut rules for when such interactions should be noted in a story,” Corbett explained. “My rule of thumb would be simple: If the information would significantly inform the reader’s understanding of the story, we should probably include it. The same goes for other details of how an interview takes place.”

For example, it wouldn’t be necessary if a publicist or spokesperson helped with a basic question, but sometimes it’s helpful for readers to know if responses were e-mailed or as part of a written statement.  “For example, an e-mail response is often more polished and nuanced than an extemporaneous comment; being specific might help a reader’s understanding in that case,” Corbett added.  He noted that explaining the publicist’s involvement in the Earnhardt profile “were quite revealing of how Mr. Earnhardt interacts with the media and the public.”

For his own part, Brisbane opined that readers should be more aware of when “publicists and other handlers” are involved in “actively working to obtain or shape coverage for a news subject.”  Brisbane advocated transparency in reporting.