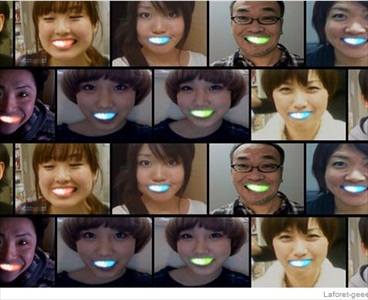 NOT A TREND: LED smiles, pictured above, aren't a trend or available to be bought. (Credit: Laforet-geee, NYTimes)

The New York Times, the Guardian, the Daily Mail, the Toronto Star, and many other news outlets all reported about a Japanese trend to wear “LED teeth” — glowing lights to be put on the “fronts” of teeth like “gold fronts.”

Unfortunately for them, it’s not a trend. But it was an advertising campaign, Japan Times reported.

“A nonexistent Japanese style trend turned into Internet meme this past week, thanks to a New York Times blog, the online version of The Guardian and other news websites. If the report — which was passed verbatim from site to site, tweet to tweet — was to be believed, the latest craze among Japanese schoolgirls was a colorful dental accessory: flashing LED lights, held in the mouth. The Japanese artists who created the device, however, say it’s a stretch.”

The LED smiles were all a part of an advertising campaign for Laforet stores, Japan Times noted.  “It was, in fact, a promotion for a Tokyo store’s sales event, and nothing more.”

The two creators of the campaign — Motoi Ishibashi and Daito Manabe — explained to Japan Times and in tweets that the LED smiles “don’t exist, nor does the trend.”  Manabe reportedly told Japan Times:

“I have seen many articles saying (the LED smile) is popular, but in fact the video (as seen on the New York Times blog) was filmed with female actors,” not schoolgirls.”

Manabe addressed the misunderstanding in a tweet:  “I got many inquiries from reporters who mistakenly think having glowing teeth is popular among schoolgirls,” Manabe is quoted as tweeting.

Ishibashi also tweeted about the the fake trend story, commenting that people from overseas have been e-mailing him “wishing to distribute the LED fashion item.”

The New York Times has already updated its Jan. 21 blog post about the LED teeth.  The Feb. 1 update at 12:36 PM stated : “Updated to clarify that the accessories are not commercially available. The LED lights were made for an advertising campaign, and there are no plans at this time to produce them for sale.”

“The new fashion accessories were originally created as an experiment by two Japanese designers and are now being used in a commercial advertising a winter sale at a Japanese clothing store, Laforet Harajuku. They are quickly becoming a sought after accessory.”

An updated version of the article now reads that:

“The accessories are being used to advertise a winter sale at a Japanese clothing store, Laforet Harajuku. The designers  said they had received numerous requests from people around the world who wanted to buy them. But they are not commercially available, and the designers said they had no plans to make them so at this time.”

The Daily Mail wrote about the LED teeth as well.  According to the Mail,

“Japanese schoolgirls have pounced on the product – which is being advertised as a ‘party in your mouth’ – and demand has gone through the roof.”

The Mail went on to wonder if the trend would be adopted in Britain, commenting that “Previous toothy-trends for gold caps and diamonds glued onto molars have been successful, so surely it can only be a matter of time?”

The Toronto Star‘s Jan. 26 story called the smiles “Japan’s latest fashion trend” and reported that the smiles “are generating buzz on the Internet.”

CNNGO.com highlighted a few cases — including the LED lights — in which Western media has published hoax stories about Japanese trends.

“The truth, however, is that the world’s media loves a zany Japan story and the LED smile toy hasn’t caught on at all. In fact the toy does not even exist — and the visuals, created by Daito Manabe and Motoi Ishibashi — were just part of an ad campaign for the Laforet fashion store.”

iMediaEthics has written to Ishibashi and Manabe for comment and more information. We will update with any response.

iMediaEthics wrote to the Times’ reporter, Nick Bilton, to see what triggered the update.  We are also writing to the Mail, the Guardian and the Star to ask if they intend to correct their stories.

UPDATE: 2/4/2011 9:59 AM EST: The Toronto Star’s public editor associate Liz McDonnell responded to iMediaEThics’ e-mail inquiry that “Thank you for contacting us.  We have updated the story accordingly and appended a note.”

The update on the story reads: “UPDATE: The designers have received numerous requests from people around the world who want to buy them, but there are no plans to produce them for sale at this time.”  See the Star’s story here.