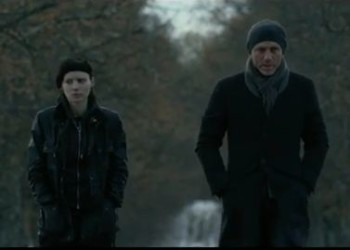 See above a screenshot from a trailer for the Girl with the Dragon Tattoo. (Credit: YouTube, screenshot)

The New Yorker’ and its film critic David Denby violated an embargo on reviewing the soon-to-be released English film re-make of the Girl with the Dragon Tattoo.

Denby’s review for its Dec. 12 issue (see here) was published online earlier this week, a full week in advance of the embargo date. TheWrap.com noted that “The review is available in full only to buyers of the magazine and to subscribers who have access to the full online edition.”  Film critics who saw the movie in advance for reviewing purposes agreed to hold publishing reviews until December 13, but Denby and the magazine broke the embargo.

The screening of the film was for the New York Film Critics Circle so the group could include it in its annual awards, National Public Radio noted.

Because of Denby’s violation of the embargo, producer Scott Rudin said he won’t let Denby go to any “future press screenings of his films,” according to the Guardian.  IndieWire published a set of early December e-mails between Rudin and Denby here.

According to IndieWire, in a Dec. 3 e-mail, Rudin told Denby: “I’m stunned that you of all people would even entertain doing this.”  He added: “It’s a very, very damaging move and a total contravention of what you agreed.”

Denby responded that it wasn’t his “intention to break the embargo” and that he “never would have done it with a negative review,” but because there are so many “big movies…at the end of the year,” the magazine had “to cope as best as it can with a nutty release schedule.  Denby added that “it won’t happen again.”

In response, Rudin reminded Denby that his “seeing the movie was conditional on your honoring the embargo, which you agreed to.  The needs of the magazine cannot trump your word. The fact that the review is good is immaterial.”  He added “I’m really not interested in why you did this except that you did….you broke your word to us and that that [sic] is a deeply lousy and immoral thing to do.”

He noted that ‘the glut of Christmas movies is not news to you, and to pretend otherwise is simply disingenuous.”

The movie’s director, David Fincher, told the Miami Herald, that while he sees that “from the outside” it may look “silly,” the issue is important.  Fincher said “this is not about controlling the media,” but “there is a business to letting people know your movie is coming out.”  Fincher added: “When you agree to go see something early and you give your word — as silly as that may sound in the information and the movie business — there is a certain expectation.”

NPR added that Sony Pictures, which produced the movie, sent an e-mail to film critics Dec. 4 “chastising” Denby for breaking the embargo.

The Washington Post concluded that Denby “shouldn’t have” violated the embargo agreement, likening it to an off-the-record interview.  “While the quality of ‘The Girl With the Dragon Tattoo’ is hardly a matter of national security, the agreement there should have been upheld as well.”

Because the embargo ends before the movie is released, the Washington Post argued that the embargo is “slightly more reasonable.”

Slate‘s Bill Wyman weighed in, as well, adding that it’s important to note that Denby “does have the ethically correct and principled position.’    Disclosing that he’s attended “free film screenings arranged by studios for critics since I was 19 years old,” he noted that the embargo in this case is typical procedure and generally at a benefit for critics because they and their publications are given more time to prepare reviews. “Embargoes also have actual real-world benefits for both journalists and readers,” he wrote, because reviews are published at the same time and readers can pick which review to read — instead of reading the first one published.

Wyman labeled Denby’s “explanation for breaking the embargo…specious” because it’s been “obvious for months” there would be many big movies released around now.

UPDATE: 12/7/2011 4:05 PM EST: We have written to the New Yorker to see if it has any further comment regarding this incident and will update with any response.

Also, see here the Hollywood Reporter’s round-up of responses to the controversy from various film critics.