News of the World Accused of Hacking Rival Journalist's Phone

News of the World Accused of Hacking Rival Journalist’s Phone 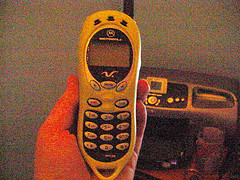 More accusations of phone hacking at News of the World?(Credit: Flickr, "Forever digital")

Dennis Rice, a former Mail on Sunday investigations editor and current freelance journalist, has accused News of the World and Glenn Mulcaire of hacking his voicemail, the Guardian reported.

Rice filed a lawsuit against the newspaper and the private investigator, according to the Guardian.  A 2006 police inquiry reportedly produced “evidence that Mulcaire” had gotten into the UK Sun’s editor at the time’s voicemail.   That editor, Rebekah Brooks, is now the News International CEO.

Earlier this month, Sienna Miller won $162,500 in a settlement over her suit alleging phone hacking.  A week later, Jude Law ‘s suit against News of the World for phone hacking was OKed.  His case, along with four others, will be “lead cases in a trial that will begin in January,” Reuters reported.  Hugh Grant announced he may sue as well, according to the Guardian.

Last week, Scotland Yard reportedly said in court there may be “hundreds of people” whose phones were hacked by the newspaper, the Guardian reported.

News of the World Accused of Hacking Rival Journalist’s Phone