News of the World Phone Hacking Scandal: Arrests, Criticism of the PCC, Bribery Claims and More 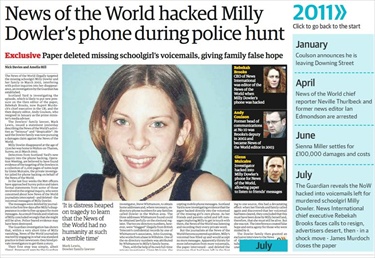 The Guardian created a timeline of events during the News of the World phone hacking scandal. This week, The Guardian's report that NOTW hacked a murdered girl's phone started a week of bad news for the newspaper, ultimately ending in its closure. (Credit: the Guardian) antivirus, limewire antivirus, limewire windows messenger, limewire pirate bay, limewire

The phone hacking scandal that led to the closing of Rupert Murdoch-owned UK tabloid the News of the World this week also led to two arrests yesterday, more criticism of News International CEO Rebekah Brooks, reports of police bribery and a massive criticism of UK regulatory body the Press Complaints Commission.

The Guardian created an interactive timeline of the phone hacking scandal here.

Andy Coulson, who was editor of News of the World from 2003 to 2007 and communications director for Prime Minister David Cameron from 2010 to early 2011,  was arrested July 8 for questioning related to “the allegations of corruption and phone hacking,” The Guardian reported.

According to The Guardian, Coulson will be asked about the allegations that News of the World bribed police officers and hacked into phones.  The Guardian added that Coulson is “the sixth person to be arrested by the Weeting team”

“I decided to give him a second chance, and no one has ever raised serious concerns about how he did his job for me. But the second chance didn’t work out and he had to resign all over again.”

The Daily Star’s offices were “raided” by police July 8, The Guardian reported.  According to The Guardian, police officers wanted “any-and-all computer material” from Goodman, who was working as a freelance for the Star.

The police reportedly are “similarly carrying out these routine checks at all places where Mr. Goodman has worked as a freelance since he left the News of the World.”  Specifically, the police wanted to “check Mr Goodman’s current email contacts to cross-match them with those from his time at the Star.” The Star added that the newspaper has “never carried and has never been accused of carrying, any story that might have stemmed from phone hacking.”

Read the full statement from the Star here.

Regarding the allegations that News of the World hacked the phone of kidnapped and murdered teenager Milly Dowler, Brooks issued a July 5 memo to her staff that denied rumors she may resign and “I hope that you all realize it is inconceivable that I knew or, worse, sanctioned these appalling allegations.”  Brooks was editor of the newspaper when the hacking occurred and many are calling for her to resign or be fired.

Brooks “has always denied any knowledge” of the phone hacking and illegal news gathering at News of the World “despite the fact they were allegedly taking place during her time as editor,” Sky News noted.

The Belfast Telegraph reported that a member of Parliament, Chris Bryant, stated Brooks’ should resign and suggested News of the World was shut down this week in “an attempt to protect” Brooks.  Bryant is suing the newspaper for hacking his phone.

The Belfast Telegraph added that National Union of Journalists’ general secretary, Michelle Stanistreet, commented that Brooks should have been axed when News of the World was shut down.

David Cameron weighed in on Rebekah Brooks’ job status as well.  Commenting that he didn’t think it’s “right for a prime minister” to be involved in the leadership of media organizations, he stated that he “would have taken” her resignation if he were involved.

James Murdoch reportedly commented to ITV News that “I am satisfied that Rebekah — her leadership of this business, and her standard of ethics, her standard of conduct, throughout her career, are very good.”

Journalism.co.uk noted that “staff” at London College of Communication have called for “the honorary fellowship granted to” Brooks, an alumnus, “to be withdrawn.”

Brooks added that News International won’t have an internal investigation “because that could interfere with the work of Metropolitan Police.”  But, the company will aid the police.  Brooks noted she won’t lead that involvement.

According to The Telegraph, News of the World staff haven’t been able to get on the internet, which has impeded their ability to work on the last edition of the newspaper.  Brooks reportedly explained the internet problems as an “operational issue.”

According to Bloomberg, James Murdoch OK’ed a $1.1 million payment in 2009 to Gordon Taylor, the Professional Footballers’ Association’s CEO when Taylor’s “lawyers uncovered an e-mail suggesting more than one journalist at the News of the World knew Taylor’s phone had been hacked”

The Guardian added that the payout was for secret “out-of court settlements in three cases” that could have proved the illegal use of private investigators to hack phones.

Journalism.co.uk reported that press regulatory body the Press Complaints Commission defended itself after Labour Party leader Ed Miliband and Prime Minister David Cameron criticized the organization for its lack of action in the phone hacking scandal. Miliband advised that “our system of regulation” should be revamped and commented that the PCC “has failed.”  He added:

“The PCC was established to be a watchdog. But it has been exposed as a toothless poodle.”

Accordng to Miliband, the PCC needs to be replaced by a “new watchdog” because the PCC “cannot restore trust in self-regulation.” Cameron advised that a new regulatory body that is “truly independent” and “on a cross party basis” should be established.

The PCC stated in response:

“We do not accept that the scandal of phone hacking should claim, as a convenient scalp, the Press Complaints Commission.

The PCC added that the organization should be more independent going forward. The PCC commented that it was “grossly undervalued” by their criticism.

The Guardian’s Roy Greenslade commented on the criticism of the PCC and questioned how the PCC would be replaced.

“It is easy to talk down the PCC, and easy to say it should be replaced, but everyone in the industry knows – especially Guy Black, the current head of the PCC’s funding body, PressBof – it isn’t easy to create a body much different from the current one without compromising press freedom (or antagonising proprietors).

Greenslade also questioned if a “new system” would be all-encompassing, noting Richard Desmond’s seven newspaper titles that “withdrew” from the PCC earlier this year. “Can he be compelled to take part in a new system?”

Regardless, Greenslade commented that any “new system” would just end up being more of “the same.”

The Guardian reported “The Press Complaints Commission, which claimed to have conducted an investigation, but failed to uncover any evidence of illegal activity.”

In 2009, the PCC looked into The Guardian’s allegations of phone hacking at News of the World. The PCC’s resulting report claimed there was “no new evidence of phone hacking” at the newspaper.

On July 6, 2011, the PCC withdrew its 2009 report, which at the time was called “pointless” and “dangerous” by The Guardian’s editor Alan Rusbridger.  Rusbridger addressed the report again this week, calling it “laughable.” Rusbridger, as StinkyJournalism has previously reported, criticized the PCC and claimed the organization needs an overhaul as it “can’t go on as it is.”

The Guardian reported that “Police are investigating evidence that a News International executive may have deleted millions of emails from an internal archive, in an apparent attempt to obstruct Scotland Yard’s inquiry into the phone-hacking scandal.”

The Guardian’s report was based on “legal sources close to the police inquiry.” According to The Guardian, the e-mails dated from January 2005 to January 2011.

“The original archive was said to contain half a terabyte of data – equivalent to 500 editions of Encyclopaedia Britannica.”

The Guardian reported that media watchdog Media Matters attempted to interview Rupert Murdoch about the phone hacking to find out if any U.S. Murdoch-owned outlets hacked.  He commented “I have nothing to say” and that he doesn’t “have to” deny the claims.

Media Matters’ Ilyse Hogue reportedly told The Guardian that the watchdog’s News Corp Watch site is “making formal approaches to the US Congress” to find out if any of the U.S. media outlets hacked phones.

The Guardian reported that “Pressure is mounting in America on Rupert Murdoch to contain the phone hacking scandal that has forced the closure of News of the World before it can spill over into his financially crucial US media interests.”

Renault is no longer advertising in “any News International press titles in the immediate future,” according to Brand Republic.

Shop Direct also “put an advertising boycott in place yesterday of all News International newspapers, pending the outcome of the investigation,” but that was before News of the World shut down.

As iMediaEthics previously reported, several advertisers including Halifax Bank and Mitsubishi issued a hold on any ads in News of the World in the near future. That announcement was made before the News of the World shut down.

The Guardian redirected readers to post any comments on the phone hacking scandal to this “open thread”  in the Guardian’s commentary section.  The Guardian explained the move as “to avoid a contempt of court in relation to any of the arrests made in connection with phone-hacking.”

The Guardian reported that as many as five police officers were paid bribes by News of the World.  The total sum of money paid was “at least £100,000” and the five were identified by “pseudonyms” in “documents” given by News International to the police.

The payments were made in 2003. The police officers are described as “not of senior rank, but include detectives.”

According to The Guardian, “James Murdoch and News Corp could face corporate legal battles” both in the UK and in the U.S.  In the UK, the company may be prosecuted for breaking the “Regulation of Investigatory Powers Act 2000 which outlaws the interception of communications.”  In the U.S., the company could be prosecuted for breaking the Foreign Corrupt Practices Act since News Corp is “a US-listed company” and bribery “would qualify.”

News of the World Phone Hacking Scandal: Arrests, Criticism of the PCC, Bribery Claims and More