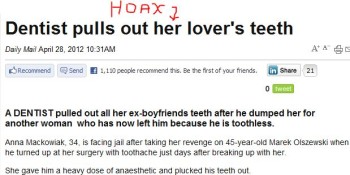 The hoax story was taken off the Daily Mail's website, but was re-published on the Australian Telegraph's. (Credit: Telegraph, screenshot, red writing added)

MSNBC broke down a sensational hoax story that made it through the international media after apparently originating in the UK Daily Mail.  (The Daily Mail has since taken down its story, but it was re-published on the Australian Telegraph’s website.)

The hoax story claimed that Polish dentist Anna Macowiak yanked out all the teeth of her ex, Marek Olszewski, “days after” Olszewski broke up with her.  The story reported quotes from both and said Macowiak “is being investigated for medical malpractice.”

According to MSNBC, “Fox News, the Los Angeles Times, the San Francisco Chronicle, Huffington Post, Yahoo! News, MSN, the New York Post, and The New York Daily News” all reported on the hoax.

But the hoax could have been prevented with a quick call to the Polish police, which MSNBC made.

According to MSNBC, Poland’s Provincial Police Headquarters spokesperson, Pawel Petrykowski, said “Lower Silesia Police Department has not been notified about such an event.”  Further, MSNBC reported that the Polish board responsible for regulating dentists said Macowiak isn’t a “listed” dentist and that it’s not looking into the reported case.

Oddly, according to MSNBC, the Daily Mail reporter credited with the story told MSNBC that he “he does not know where the story came from and distanced himself from it when questioned about its origins. ”

Web Pro News reported on the hoax and noted that it fell for the hoax. The original story doesn’t carry a correction.

We’ve collected a list of other outlets that have stories up about the dentist tooth-pulling story without corrections on the original article.  We have written to all the below outlets asking about any corrections and will update with any responses.

Several news outlets have posted retractions or corrections on their reports about the dentist story, including MSN for its April 28 story.

Canada’s CBC News posted an update to its original April 27 report on the teeth-pulling noting that the story is a hoax.

The Huffington Post retracted May 9 its April 28 story. The retraction reads:

“RETRACTION: MSNBC reported today, May 9, that the dentist accused of drugging up her boyfriend and pulling his teeth out doesn’t exist. Cops in Wroclaw, Poland told the station that they hadn’t received word of such a crime, and a legal adviser for Poland’s Chamber of Physicians and Dentists said there is no dental practitioner named Anna Mackowiak.

“A handful of respectable publications ran the story before it was aggregated. Still, we strive to make sure all the articles we publish are 100-percent accurate. We regret the error.”

Yahoo News posted an update on its April 30 story reading in part:

“UPDATE: A new report from MSNBC suggests that the original report is a hoax. Contributor Erin Tennant claims to have received a translated denial from Polish authorities calling into question the report first run by The Daily Mail and Austrian Times.“

The Los Angeles Times‘ May 1 article was updated May 9 with a correction linking to the MSNBC.com story.

The San Francisco Chronicle updated its April 30 story to report that the dentist tale was a hoax and linked to the MSNBC report.