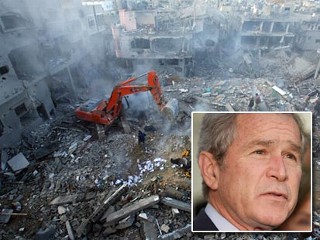 Blogger Tom Blumer accused AP/Getty of propaganda in his piece, "AP/Getty Overlays Bush Picture Into One of Gaza Wreckage." StinkyJournalism.org soon discovered that AP/Getty did not create the layered image. ABC News did. ABC News's confusing caption may have started the trouble...

After ABC News overlaid an AP photo of former President George W. Bush in the corner of a Getty photo of wreckage in the Gaza Strip, it likely set off a chain reaction that highlights the problem with poor captioning.

I started this post after reading a blog post by Tom Blumer on Newsbusters.org, “AP/Getty Overlays Bush Picture Into One of Gaza Wreckage.” Blumer falsely claimed that AP/Getty Images created the layered image. He wrote, “For ‘some reason,’ the editors of the AP/Getty photo on the right placed President Bush’s image at its bottom right. ABC, in a report by Miguel Marquez and Simon McGregor-Wood that appears to have run on World News tonight, chose to use it.” But ABC News created the composite image– not AP or Getty.

Next Blumer wrongly concluded the duel image demonstrated “that the press has decided to go with ‘creative’ image placement to do the dirty work that must be done to create sympathy for Hamas and antipathy towards President Bush and the United States.” Yikes. In other words, he accuses AP/Getty of propaganda. If he is going to make such bold accusations, he should at least make sure he is accusing the right media outlet !

I think the real issue is poor captioning. The caption for the original Getty image, (without Bush’s face), is clear. It states: “A general view shows the destroyed house of Hamas leader of Nizar Rayan following an Israeli air strike the day before in Jabalia in the northern Gaza Strip on January 2, 2009. Two Israeli fighter jets fired missiles yesterday on the home of Rayan in the Jabaliya refugee camp, killing the hardline firebrand speaker, his four wives, 10 of his children and two neighbors, witnesses and medical sources said.”

The caption trouble started when ABC News added Bush’s face and his quotes. Their new caption began well by correctly citing that the wreckage resulted from an Israeli attack on a Hamas leader’s house. However, their second sentence caused confusion. They quoted Bush calling HAMAS attacks an “act of terror” while the debris we see in the photo was an ISRAELI attack.

When adding an additional image to a photograph, the meaning can easily change, get lost or confused from such “creativity.” This example shows that ABC News needs to take greater care when captioning combined images.

We have contacted ABC News and NewsBusters.org. Ken Shephard, managing editor at NewsBusters.org, said they will look over the story and correct it. He thanked us for being in touch, and agreed to make the link for notifying them about corrections more prominent.