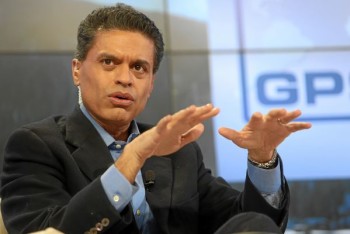 CNN is standing by Fareed Zakaria for now but Newsweek, one of the many publications where Zakaria has worked, has acknowledged new plagiarism complaints against him. They have, in fact, invited anyone concerned about attribution issues in his work to contact the publication.

Zakaria has been accused of plagiarism in his CNN show Fareed Zakaria GPS by anonymous bloggers writing for “Our Bad Media.”

Newsweek warned readers about the magazine’s concerns regarding Zakaria’s work. The magazine responded to the new complaints against the reporter, who hasn’t written for Newsweek since 2010, with an editor’s note, Poynter reported. Newsweek‘s managing editor Kira Bindrim told iMediaEthics by e-mail that the magazine added its editor’s note on Sept. 29. She declined to comment on our questions asking how many complaints, if any, Newsweek has received, and what prompted the editor’s note.

“Fareed Zakaria worked for Newsweek when it was under previous ownership. Readers are advised that some of his articles have been the subject of complaints claiming that they contain material that should have been attributed to others. In addition, readers with information about articles by Mr. Zakaria that may purportedly lack proper attribution are asked to e-mail Newsweek at corrections@newsweek.com”

In August 2012, Zakaria apologized after being busted for plagiarizing from The New Yorker. CNN and Time magazine both suspended him while they looked into his work. The Washington Post also reviewed his work.  After CNN and Time cleared Zakaria, they reinstated him. Zakaria also apologized on air for CNN.

In mid-August, Zakaria denied he plagiarized. He said the issues in question relate to facts not opinions, which are OK to re-use.

“These are all facts, not someone else’s writing or opinions or expressions,” Zakaria told Politico. He noted that he doesn’t need to source facts in the public domain. (full statement at Politico.) He also pointed to the CNN, Time and Washington Post’s investigations of his work two years ago, which concluded none of his work was problematic.

New accusations against Zakaria arose after an anonymously-run blog, Our Bad Media, listed numerous instances of questionable or missing attribution and plagiarism.

In a lengthy Sept. 16 article, Our Bad Media said that there were “two dozen episodes” of Zakaria’s program since 2011 that contained attribution issues.

Our Bad Media also questioned in mid-August the thoroughness of the 2012 reviews of Zakaria’s work conducted by the Washington Post and Time when it found other examples of questionable passages during the time his work would have been examined. iMediaEthics has written to the Post and Time asking for comment about Our Bad Media’s accusations.

Here’s another side-by-side comparison of work from 2013.

“- About 14 percent of the prison population is in federal prison — that’s the group Holder is talking about.”
“- The single largest driver in the increase in the federal prison population since 1998 is longer sentences for drug offenders.”
“- The most serious charge against 20 percent of state-prison inmates is a drug offense. That’s much lower than the 51 percent in federal prisons, though it’s still larger than any other single category of offense in state prisons.”

“It’s important the attorney general brought up drugs, because the numbers are startling. Federal prisons, the group Holder was referring to, account for about 14 percent of our total inmates. In these prisons, the most serious charge for nearly half of all inmates is a drug offence. Compare that with state prisons, where only 20 percent of the inmates have a drug offence as their most serious charge.”

Stelter said, “My reporting leads me to believe that Zakaria’s program made some attribution mistakes, a small number, to be fair. They are the kinds of mistakes that other journalists can learn from, and viewers too.”

CNN also has stood by Zakaria. In a statement aired by Stelter, the network said, “CNN has the highest confidence in the excellence and integrity of Fareed Zakaria’s work. We have found nothing that gives us cause for concern.”

Stelter commented that the bloggers behind Our Bad Media “are waging a campaign against Zakaria.”

“I believe most of their claims about [Zakaria’s show] GPS, 26 total, do not hold up under close scrutiny,” Stelter said. “The closer you look the less it looks like a capital P plagiarism.”

He added, “I believe the perception in this case is worse than the reality.”

Stelter did admit Zakaria “was overly reliant on his source material,” quoting The Poynter Institute’s Kelly McBride’s analysis for Politico.

In mid-September, Politico‘s Dylan Byers had two journalism ethicists review the incidents raised by Our Bad Media. Byers said he, Poynter’s McBride and the Univ. of Wisconsin-Madison’s Center for Journalism Ethics director Robert Drechsel, all concluded Zakaria did plagiarize.

McBride noted that she would characterize it as “low-level,” but still plagiarism.

Stelter wondered if Zakaria was responsible for the problems or if it was a producer’s or staffer’s fault.

In 2012, the Washington Post also reported accusations that Zakaria lifted a quote from a book by Clyde Prestowitz. Prestowitz retracted his claim after he said he found an end note where he was credited. The Washington Post corrected and apologized for its report, admitting it shouldn’t have published the claims and failed to independently verify the accusations.