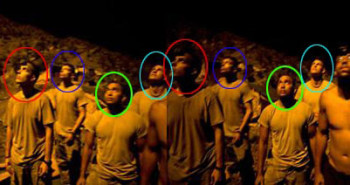 Four of the soldiers pictured appear twice. The Newsweek photo suggests there are 11 soldiers, but there are really only seven. Dan Levinson, who complained about the photo to StinkyJournalism, circled the "clones" or "twin" soldiers. (Credit: Dan Levinson's analysis of Dan Hetherington's photo in Newsweek's May 10 issue)

StinkyJournalism received a complaint about the May 10 issue of Newsweek from graphic designer and StinkyJournalism reader Dan Levinson. He noted that a Newsweek photo of a platoon of U.S. soldiers in Afghanistan’s Korengal Valley looking at a flare had the same men repeated in different places and angles. See his photo analysis, depicted above. The corresponding colored ovals show where to quickly find the duplicated soldiers. Instead of 11 soldiers in the shot as it readily appears, there are only 7 soldiers with 4 repeated twice.

For content, media ethics codes require that news photos be documentations of events–not staged, Photoshopped, or otherwise manipulated unless there is clear disclosure. StinkyJournalism has reported on many of the media scandals where editors or photographers failed to make proper labeling within their captions, such as “Photo illustration” – here, here, and here. Photo illustrations are fine, in StinkyJournalism’s view, as long as they’re properly labeled as such.

In the Newsweek photo, the single rectangular frame with no immediate indication of a seam, shows what only appears to be a panoramic picture of eleven soldiers looking up toward the sky. The photo isn’t a document of a single moment in time, but a composite of two images taken at two different times and from two different angles.

Yet, nowhere in the print version of Newsweek magazine does the caption indicate anything other than a straight news photograph :  “Members of the second platoon watch a flare fired to mark the anniversary of a comrade’s death.”

Until StinkyJournalism’s investigation, the online version of the same image originally had no caption at all.

We wrote to the photographer Tim Hetherington, May 13. He replied by e-mail that:

“I actually composted the two images together and supplied it to Newsweek. I liked the way it’s a slightly different angle and makes an interesting panoramic shot, repeating individuals.  It reminds me (of) the film ‘Close Encounters.'”

The photo accompanies a news story by Sebastian Junger about his time embedded with U.S. forces in the Korengal Valley.  Fifteen other photos by the same photographer, Tim Hetherington, originally appeared in an online photo gallery with the story. (Interestingly, StinkyJournalism noticed May 17 that after we complained to Newsweek about the caption, the photo gallery accompanying Junger’s story and Hetherington’s photo composite became unlinked and no longer shows fifteen photos by Hetherington, but instead this photo gallery of iconic war images.)

And, the seam between the photos isn’t obvious because the single rectangular “frame” dominates the image. The continuous, seamless frame deceives the eye and brain into believing the photo is a single panoramic image as was the photographer’s stated intent–not two.

The online version of the photo also does not readily show the seam between the photos either and is available here– so judge for yourself.

StinkyJournalism has a scan of the article and photo available here.  But note, StinkyJournalism separates the two pages. The actual version of the two-page spread, juxtaposes the pages together so that there is no space in-between the two images.

Molloy said that the photo wasn’t labeled illustration, in part, because the Newsweek story featured Hetherington’s photos in the headline and they were concerned if they labeled the first one “photo illustration” readers might have the wrong idea that all the images, not just the first one at the top, were composites if they added the disclosure in the gutter.

However, when StinkyJournalism alerted Molloy that the online version also featured the composite image with no disclosure, Molloy said it would be fixed.

The photo caption was updated May 17.

We contacted the Society of Professional Journalists ethics committee about this photo. Members concurred that the composite photo misleads readers and breaches three separate clauses of the SPJ Code of Ethics. See below.

The SPJ code of ethics advises:

This isn’t the first time Newsweek has raised eyebrows with its photo choices.  In its November 23, 2009 issue, Newsweek wrote a story on “How Sarah Palin hurts the GOP and the country.” For the cover of that issue, Newsweek picked a photo of Palin from the August 2009 issue of Runner’s World.  Palin called the use of the photo “sexist.”

And in March 2005, Newsweek published a Photoshopped image of Martha Stewart’s head on a slimmer body for its cover image. The photo credit on page three of the magazine did identify the photo as a photo illustration, The New York Times reported, but the photo was still considered by many experts as deceptive. Newsweek apologized.

Disclosure: Readers should note that a member of the ethics committee, Robert Buckman, writes an unpaid media ethics column for StinkyJournalism, called The Faux Pas Files. StinkyJournalism’s editor and publisher, Rhonda Roland Shearer is a SPJ member and was a recipent of a FOIA grant in 2009.

StinkyJournalism has also contacted the publicist for Sebastian Junger, who wrote the article, and will post any response.