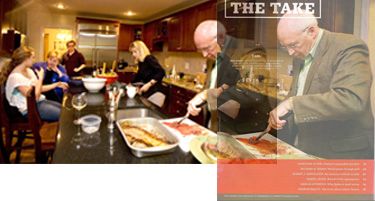 In the September 14, 2009 issue of Newsweek, readers saw a dramatically altered version of an image taken by Pulitzer Prize-winning photojournalist David Hume Kennerly. The published, Newsweek version (on right) cropped out former Vice President Dick Cheney's family, focusing instead on Cheney wielding a knife at a cutting board. Kennerly wrote an essay expressing his displeasure with the Newsweek editors who cropped the image to convey a menacing meaning not communicated in the unedited, original photo. (Photo credit: David Hume Kennerly)

On September 17, 2009, the New York Times photography, video, and visual journalism blog, Lens, published an essay by the Pulitzer Prize-winning photojournalist David Hume Kennerly. In the essay, Kennerly takes issue with the way his photograph was cropped for an article in the September 14, 2009 issue of Newsweek. He felt the editing was so extreme as to distort the meaning and context of the image.

The cropped photo features former Vice President Dick Cheney, as Kennerly describes, “knife in hand, leaning over a bloody carving board.” But the original image showed a much more nuanced scene: Cheney and his wife, along with their two daughters, all crowded together in daughter Liz’s kitchen.

Kennerly asserts that Newsweek cropped the image to “illustrate its editorial point of view.” And, in fact, Frank J. DeMaria, the vice president of corporate communications at Newsweek, admits as much.

In a response to Kennerly’s essay, DeMaria wrote to the New York Times’ Lens blog “Did we use the image to make an editorial point — in this case, about the former vice president’s red-blooded, steak-eating, full-throated defense of his views and values? Yes, we did.”

But DeMaria denies Kennerly’s accusation that the cropped photo implies something “sinister, macabre, or even evil” was taking place within the photo.

DeMaria’s response is confusing because, on the one hand, he says that no reasonable reader would assume “sinister, macabre, or even evil” was going on in the image but, at the same time, he admits that the image was altered with the intention of making an editorial comment on Cheney’s “views and values.”  So, while it is true that Newsweek readers might not see the image and think Cheney was mid-kill, the cropped photo carries enough symbolic weight to clearly imply editorializing.

The accompanying Newsweek story on Dick Cheney by Jonathan Alter discusses Cheney’s position and statements on torture policy. In the article, Altar uses the first person and issues personal opinions taking a clear personal position on the issues. But it’s one thing for an individual writer to compose an opinion piece and another for the publishing magazine’s editors to assert an editorial position by including an altered photo meant to intentionally enhance the writer’s opinions.

Kennerly’s essay generated a huge response in the comments section, one of which came from photojournalist Kenneth Jarecke, who has worked for the Associated Press, TIME magazine, U.S. News and World Report and has won a World Press Photo award and the Leica Medal of excellence. Jarecke makes an interesting and important point in his comment:

“It all comes down to intent. Photojournalists realize that the goodwill they enjoy with both their subjects and their viewers relies on their intent to show things as accurately as possible. That’s the real value that we (photojournalist) bring to any publication. Newsweek, with the silly statement by Frank De Maria above, has revealed their intent is to use journalistic content to manipulate their readers into accepting a political position that is held by them. This is the opposite of journalistic integrity. Their intent was clearly to show things inaccurately.”

Jarecke goes on, taking Kennerly’s example and looking outward, at a larger trend in news coverage. “This is a perfect example of why the print media is failing. The editors think so little of their readers, they hold them in such contempt, that they simplify and try to spoon feed every little morsel they serve up.”

Adding weight to Jarecke’s accusations, the cover of the September 14, 2009 issue of Newsweek featured a photo of a baby with the headline, “Is Your Baby Racist?” And just a week later, the cover of the September 21, 2009 issue of Newsweek featured a single grey electrical plug on a white background, with the headline, “The Case for Killing Granny.” The corresponding article on end-of-life care and health care costs is a well-reported, measured article on some key issues in the current health care debate. And the article is accompanied by a photo series featuring hospice patients in prisons. Why, then, considering the quality of both the article and the photo series, would Newsweek‘s editors choose a sensationalist image for the cover? The answer may be obvious, but in taking the low road, they cheapen and trivialize the value of their own content and exploit the emotional fears of fringe-groups.