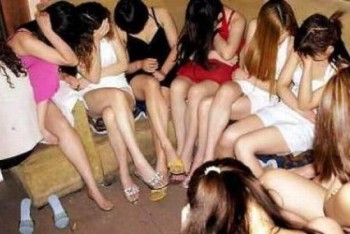 The Post-Courier used this 2012 photo from Nigerian sites with its 2015 story.

The 2012 photos came from a Nigerian website in a story “about 13 teenage girls of Asian origin arrested in Nigeria in 2012 over prostitution,” Papua New Guinea Today said.

But the Post-Courier claimed the photos were evidence of Asian sex workers in Papua New Guinea in its report by Gorethy Kenneth stating “Asian sex workers, both male and female, are flooding Paupa New Guinea because the demand for their services is high.”

The photo captions said that they show “Asian prostitute in a club in Port Moresby,” Papua New Guinea’s capital.

See the front-page photos below, published Feb. 19 on the Post-Courier‘s Facebook page.

The same inset photo of a group of women covering their eyes was published in August 2012 on Nigerian sites Jaguda.com and Uncle Naira,

A screenshot of the 2012 article on the Nigerian site Jaguda. The photo of this image was later used by the PNG paper Post-Courier.

Readers have called for an apology and the firing of the reporter and editor, according to Papua New Guinea Today.

“It is a real slap in the face to all levels of journalism when plagiarism is practiced,” former Post-Courier journalist Jason JayPrince Wuri is quoted by the Papua New Guinea Today as saying. “It breaks all forms of journalism ethics and as a journo it’s a real shame! Especially if it’s a sensitive issue like prostitution and flaws in our immigration system which are real and ongoing issues affecting our great nation.”

He added that it was “lazy journalism without proper investigation.”

“An apology would be nice given some of us are Post-Courier readers and love the daily and I think they owe it to us the readers,” Wuri went on. “Please don’t lie to us your readers. Apologies to my former boss Mr A Rheeney and the team if I have stated the importance of journalism ethics. We are faithful readers please give us the truth and the best content on issues affecting the nation!”

On the Post-Courier’s Facebook page, readers criticized the paper for its photo choice. See some of the comments below:

iMediaEthics has reached out to Wuri via Facebook to confirm his remarks. We’ve also contacted the author of the Post-Courier report for comment.

Back in 2011, Australia’s ABC reported accusations of fraud against Papua New Guinea’s media council, which received half a million dollars from Australia’s AusAID in 2010.

“But a recent audit found some of the money “had not been managed in accordance with procurement guidelines” and there was “anecdotal evidence of fraud,” ABC reported.

“the Council’s executive director Nimo Kama was suspended pending further investigations,” ABC reported.  The president of the council in 2011, Joe Kanekane, died in 2013. iMediaEthics is unsure if the council is still active as its website doesn’t load and Facebook page hasn’t been active for years.

Regardless, the council’s ethics code is available here.