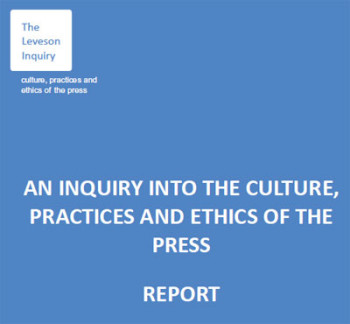 The report from Leveson One.

The Leveson Inquiry into UK press standards and practices was officially shut down yesterday, meaning there will not be a second portion of the inquiry dubbed Leveson Two. “The second part was scheduled to consider the extent of improper conduct and governance failings by individual newspaper groups, how these were investigated by the police and whether police officers received corrupt payments or inducements,” the BBC reported.

The Leveson Inquiry was created as the phone hacking scandal consumed UK media back in 2011. As readers may remember, in July 2011, the UK Guardian reported that the News Corp.-owned News of the World had hacked in 2002 the voicemail of teenager Milly Dowler, who was then-missing and later found dead. That hacking allegation was one of many allegations made in 2011 of press wrongdoing, and the News of the World shut down publication days later.

Then-Prime Minister David Cameron established the inquiry in 2011, saying it was to be a two-part inquiry. According to the Leveson Inquiry website, “Part 2 of the Inquiry cannot commence until the current police investigations and any subsequent criminal proceedings have been completed.”

In Parliament, the Culture Secretary Matt Hancock made the announcement of the inquiry “formally closing,”saying it was because the “world had changed” since the Leveson Inquiry began and the press improved. “We do not believe that this costly and time-consuming public inquiry is the right way forward,” he is quoted as saying. Further, he said that the UK press regulator the Independent Press Standards Organisation “largely complied with Leveson’s recommendations.”

Further, Hancock remarked, “So it is clear that we have seen significant progress, from publications, from the police and also from the newly formed regulator.” iMediaEthics wrote to Hancock’s office for more information about the decision and reaction. Hancock’s office pointed iMediaEthics to his statement in Parliament.

Hancock also said that the government plans to repeal Section 40 of the Crime and Courts Act, which would require media outlets “to pay legal costs in libel cases whether they won or lost,” Sky News reported.

iMediaEthics also wrote to the judicial offices, where Leveson works, for his response to the closure. A senior press officer at the judicial office said Leveson isn’t commenting “in keeping with his long standing convention,” but pointed to his Jan. 23 letter to the government outlining his position.

In that Jan. 23 letter to Hancock, published yesterday, Leveson argued that part two of the inquiry should start “as soon as possible.”

“I have no doubt that there is still a legitimate expectation on behalf of the public and, in particular, the alleged victims of phone hacking and other unlawful conduct, that there will be a full public examination of the circumstances that allowed that behaviour to develop and clear reassurances that nothing of the same scale could occur again: That is what they were promised,” he wrote.