How Racist Are We Americans? What an AP Poll Suggests - iMediaEthics 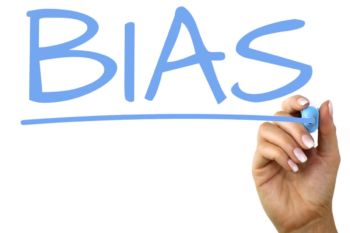 In a recent article, former Fox and current CNN commentator, Sally Kohn, argues that everyone is implicitly biased.* As she writes, “all of us need come to terms with the fact that we all hold unconscious ideas about the superiority of some groups and the inferiority of others.”

To be clear, she says,

“I believe that most Americans really don’t consciously subscribe to racism or most other overtly bigoted beliefs. Even still, African Americans are incarcerated at five times the rate of whites and receive harsher sentences for the same crimes. Women earn less than what men earn for the same work. LGBT youth are disproportionately more likely to be homeless. Unemployment rates for black and Latino Americans are almost double those for whites. If we’re no longer, by and large, overtly bigoted, how do these blatant injustices persist?”

Research, she says, suggests that one reason the injustices persist may be our unconscious biases – or “implicit” biases – that are formed as we grow up in a society that is itself biased in favor of some groups over others.

“As products of a sexist society, we all have a bias in favor of men and masculinity and against women and femininity.

“As products of a racist society, we all have a bias for white people and against people of color.

“As products of a classist society, we all have a bias for rich people and against poor people. And so on.

“We don’t consciously hold these beliefs; they’re like deep-down reflexes we’ve habituated to over time. They’re encoded in our brains and, in turn, they play out in ways that then reinforce society-wide bias.”

According to this thesis, we “all” – white and black, men and women, rich people and poor people – have an implicit negative bias against women, people of color, and poor people.

It is in the realm of possibility, I think, to suggest that most of us, and maybe all of us, are afflicted to some degree with implicit bias – but the notion that we all share the same biases seems completely implausible. Yes, there is probably a dominant culture in the United States related to race, but there are also many subcultures, which could certainly produce different feelings from the dominant culture.

What One Poll Shows

In November 2012, I wrote about an Associated Press poll, conducted by researchers from Stanford University, the University of Michigan, and NORC at the University of Chicago, which was designed to measure “implicit” racial bias. It did not look at gender bias, but the results of the poll are instructive about how likely it is that all of us share the same racial biases.

To measure racism, respondents were shown neutral images of a Chinese character – or ideograph – right after a photo of a black male or a white male had been flashed on the screen. The respondents were then asked to rate their feelings, positive to negative, about the ideograph.

The assumption of this method, apparently, was that the Chinese character or ideograph would, by itself, elicit a neutral reaction, since most Americans don’t know the meaning of such ideographs. Thus, any positive or negative feeling a respondent gave after the ideograph had been shown would actually reflect the respondent’s positive or negative feeling about the photo that had been flashed on the screen just prior to the ideograph.

Overall, the poll results based on this measure suggested that well over half of all Americans had implicit racial biases against blacks.

“When measured by an implicit racial attitudes test, the number of Americans with anti-black sentiments jumped to 56 percent, up from 49 percent during the last presidential election…the share of Americans expressing pro-black [anti-white] attitudes fell.”**

Although the AP news story did not mention the precise percentage with anti-white attitudes, Josh Pasek of the University of Michigan, the lead researcher, sent me the full results.

As shown in the chart below, the poll revealed that 33% of Americans exhibited anti-white attitudes and 55% anti-black attitudes, while 12% exhibited no racial bias. 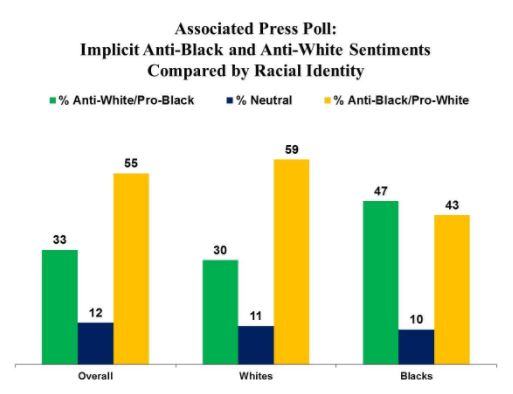 Note also that among whites, more respondents revealed anti-black than anti-white attitudes, while among blacks, the reverse pattern is found – although not nearly to the same degree as with whites.

The significant percentages of people with anti-white attitudes overall, and among both whites and blacks, rebut Kohn’s argument that “all” of us share the same bias against blacks.

These results do support Kohn’s more general thesis, however, that most, if not all, people entertain some degree of implicit racial bias, even if not all in the same direction.

It’s also the case that significantly more people are implicitly biased against blacks than whites, which, as Kohn suggests, is reflected in many policy outcomes that disadvantage blacks. Clearly, racism is a problem for this country, as it is for most countries in the world.

Still, I think the AP measure has some conceptual merit. If somebody feels negative about an individual person solely because of that person’s race, such a reaction would seem to be the very definition of racism.

Of course, the AP poll results are based on just one way of measuring implicit bias. There are many other ways, which could produce different results.

Still, it’s probably reasonable to suggest, as does Kohn, that most – if not all – of us have an unconscious bias against some groups, even if the bias is not always in the same direction.

Recognizing the widespread prevalence of bias, even if it is only implicit, is probably an important step in confronting and ultimately overcoming racial divisions in this country.

*Kohn’s article on The Daily Beast is an adaption of ideas found in her book, The Opposite of Hate: A Field Guide to Repairing Our Humanity (Algonquin Books of Chapel Hill, 2018).

**While the news report said 56%, data provided by Josh Pasek, the lead researcher, showed 55%. The difference is no doubt due to rounding error.