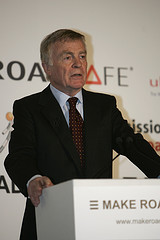 Max Mosley, pictured above, sought to have a European court require prior notification by newspapers. (Credit: Flickr, "makeroadssafe")

The European Court of Human Rights ruled against Max Mosley, the former director of the governing body of Formula One, who had called for a “prior notification” rule in the UK, the UK Mirror reported. Formula One is a category of car racing.

Prior notification would require newspapers to contact subjects of stories before publication.  If approved, in the UK, subjects could seek an injunction against the news outlet barring publication.  (See the ruling here.)

In 2008 when the News of the World story broke, Gawker-owned blog Jalopnik posted a story noting that News of the World had a “five-hour video” and clips from the liaison in which “Mosley appears to be both dominated and submitting to the five hookers, who NOTW alleges were dressed both as Nazis and concentration camp prisoners.”

The charges were particularly damning because Mosley is the youngest son of Oswald Mosley, founder of the British Union of Fascists who was interned for the duration of World War II for his political activities. UK’s High Court decided that report and accompanying photos had “no justification” to be printed. NOTW paid him £60,000 in that ruling.  Bloomberg noted that Mosley left his position at F1 in 2009.

The Human Rights court decided that by prior notification would come at a loss to freedom of expression. The court stated: “The European Convention on Human Rights does not require media to give prior notice of intended publications to those who feature in them.”

Mosley has stated he plans to appeal and that the case has to do with privacy:

“It’s absolutely essential to do everything that you can to preserve people’s privacy, people’s freedom in that sense, and whatever I can do in that regard I’m going to do. Most of the people they publish this private information about probably have got the means to sue.

Sky News noted that the court stated that in lieu of prior notification, if the media goes too far, the public can always complain to the Press Complaints Commission and the courts.

See here a detailed look at the case on the International Forum for Responsible Media blog.