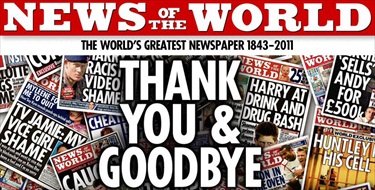 A man is suing the publisher of the now-closed News of the World for his name being revealed as an anonymous source. (Credit: NOTW, screenshot)

The lawsuit alleges that the newspaper identified Capewell, who is “the brother of a prison officer who worked at high-security lock-up HMP Frankland,” as the newspaper’s anonymous source for “leaked stories” about a man in that prison, Ian Huntley.

“In doing so, Mr Capewell alleges that they have caused him to suffer the indignity and intrusion of a criminal trial, caused his reputation to be smeared and caused him to lose his job. Mr Capewell says that his life has been ruined,” Capewell’s attorneys, who aren’t named by the Guardian, are quoted as saying.

News of the World didn’t report on Capewell’s alleged tips, according to the Guardian.