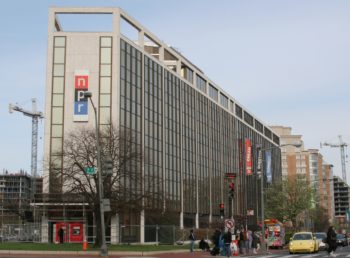 National Public Radio is getting rid of online commenting.

In an announcement today, NPR acknowledged “our success depends on our ability to connect with our listeners and readers” but that it gives up on online comments.

“After much experimentation and discussion, we’ve concluded that the comment sections on NPR.org are not providing a useful experience for the vast majority of our users,” the announcement by NPR Managing Editor for Digital News Scott Montgomery says. Comments will end next week, Aug. 23, and all past comments will disappear, NPR ombudsman Elizabeth Jensen reported.

“Reactions have been mostly positive on Twitter with many reporters from other media organizations weighing-in in support. People appreciated the data that we gathered and found it compelling.

“In the comments section on the website, logically, the reaction is more mixed, as those who are regular commenters will miss the space and the people they interacted with.”

Currently, the comments section is open, and flags to readers that the section is going away.

Even though Montgomery wrote that NPR wants “to hear your voice” and have readers and listeners “actively inform our ideas about the stories we tell and how we tell them,” Montgomery says most readers aren’t commenting on its website.

“Far less than 1% of that audience is commenting, and the number of regular comment participants is even smaller,” he wrote. “Only 2,600 people have posted at least one comment in each of the last three months –– 0.003% of the 79.8 million NPR.org users who visited the site during that period.”

Demographically, most commenters are male and using desktop computers, she said, and NPR faced the same major problem as most news sites — an influx of inappropriate comments.

On Twitter, Jensen retweeted Nathan Lawrence from Missouri NPR member station KBIA, who noted, “Of the comments I moderate daily, nearly half contain racial slurs or derogatory terms for women or queer people.”

Of the comments I moderate daily, nearly half contain racial slurs or derogatory terms for women or queer people. https://t.co/qQFZr2gxCE

After much careful thought, @NPR plans to discontinue story page commenting. So many more people in other places. https://t.co/H8QQtqWcya

Jensen weighed in on the decision in her own blogpost commenting, “NPR stands for National Public Radio, so a decision to limit ‘public’ input at NPR.org seems especially jarring.”

Jensen also looked at the numbers NPR has on its online commenters and pointed out that only 4,300 users posted 2/3 of all of NPR’s comments in June and July. “The conclusion: NPR’s commenting system — which gets more expensive the more comments that are posted, and in some months has cost NPR twice what was budgeted — is serving a very, very small slice of its overall audience,” she wrote.

Jensen pre-empted questions about whether NPR is required to have comments since it “indirectly receives federal funding (via the membership fees paid by stations.)”

“It does not, in fact, have any such legal obligation,” she reported. “NPR’s obligation is ‘to provide information,’ not to ‘create and maintain a public square,’ Montgomery said.” Regardless, she said NPR did try to provide comments but it just wasn’t worth it.

“Seeing the current sorry state of NPR.org commenting, I support the move to end comments,” Jensen concluded. “I am also disappointed. The vast majority of NPR-produced shows no longer even run snippets of letters from listeners; this latest move seems like a step backward, as understandable as it is. So I hope NPR will make good on the promises that newer engagement options will be tried out.”