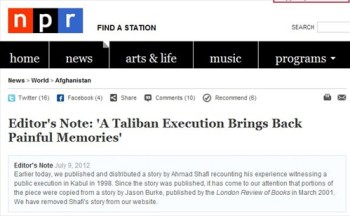 “Earlier today, we published and distributed a story by Ahmad Shafi recounting his experience witnessing a public execution in Kabul in 1998. Since the story was published, it has come to our attention that portions of the piece were copied from a story by Jason Burke, published by the London Review of Books in March 2001. We have removed Shafi’s story from our website.”

“What happened is fairly simple: an intern made a mistake. English is not Shafi’s first language; it’s one of five he speaks. In writing about this execution he witnessed in 1998, he went looking for a better way to describe what he remembered seeing. When asked about the similar passages by our editors, he was completely upfront and honest, and deeply contrite.”

The Atlantic Wire wrote that Shafi, an intern,”won’t be leaving the network or facing any disciplinary action, at least until a review of the rest of his work concludes.”  NPR’s Anna Christopher confirmed that NPR is “conducting a complete review of the work that Shafi has done for NPR — a standard procedure.  In the meantime, he’s not writing for our air or online, pending this review.”

We wrote to Jason Burke, whose work was plagiarized. Burke said in an email that

“Such incidents seem fairly frequent which is a shame, though perhaps inevitable given the combination of the internet and cuts meaning less supervision and training for young reporters. The incident sounds like a serious error of judgement more than anything else. Frankly I’m surprised – and rather pleased –  that anyone is still reading 11 year old reports of mine.”

NPR said Shafi worked for NPR “for the purpose of learning, and, if anything, this is a very public learning experience,” the Atlantic Wire added.  Poynter noted that Shafi also has “worked in NPR’s Kabul bureau for over a year as a producer, fixer and translator.”

We asked NPR’s Christopher if this incident will prompt any training on plagiarism for interns or Shafi.  She said that “no changes to our practices or policies are planned.”

Christopher also wrote that NPR “received an email from a reader/listener, into our corrections account.”  Burke told us he didn’t send the complaint and “learned about the plagiarism well after NPR had taken the piece down, almost simultaneously from my office and from reporters in the US.”