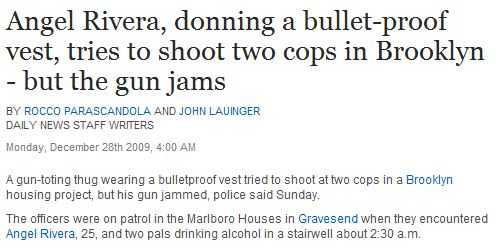 The New York Daily News was ordered to identify a source from this story to the court. (Credit: NYDN)

The New York Daily News was ordered to reveal the identity of a source to a New York court last month, Reporters Committee for the Freedom of the Press (RCFP) reported.

In the case in question, a New York man, Angelo Diaz, was charged with “attempted murder in the second degree” from a 2009 incident in which another man, Angel Rivera,  reportedly “tried to shoot at two cops” and fled, “prompting a brief chase.” State prosecutors claim that Diaz “shouted ‘shoot the cop'” but the Daily News reported that Rivera’s mother is actually the person who “yelled ‘Shoot the Cop.'”

The court ruled that the Daily News had to reveal its source because Diaz’s “interest overcomes” journalists’ shield law.

Rivera “was charged with attempted murder, criminal possession of a weapon and unlawful wearing of a bulletproof vest” according to the December 2009 report.

The Daily News ended up disclosing the name of the source to a New York judge in lieu of appealing.  First Amendment Center noted that “It’s unknown whether the Daily News disclosed the identity of its source, because Justice Mark Dwyer ruled on Jan. 11 that the newspaper only had to disclose in chambers whether its source was one of two arresting officers at the scene of an attempted murder.”

The New York Daily News’ Dec. 28, 2009 story, which described Rivera as “a gun-toting thug wearing a bulletproof vest,”  explained that

“The cops struggled with Rivera for control of the weapon while, according to authorities, Rivera’s mother, Rosa, 43, yelled: ‘Shoot the cop! Shoot the cop!’

“The officers were on patrol in the Marlboro Houses in Gravesend when they encountered Angel Rivera, 25, and two pals drinking alcohol in a stairwell about 2:30 a.m.  When the officers attempted to question the trio, Rivera bolted, prompting a brief chase.

According to RCFP, Diaz cited the Sixth Amendment, which concerns the rights of the accused in criminal trials and grants the right to “be confronted with the witnesses against him.”

The Daily News’ vice president and deputy general council, Anne B. Carroll, reportedly explained to RCFP why the newspaper decided not to appeal the ruling.  Carroll is quoted as saying:

“The Daily News has chosen not to appeal Justice Dwyer’s order because we think the decision was narrowly confined to the unique facts of the case: the accomplice liability charge against the criminal defendant rests solely on the arresting officers’ word that it was Diaz who shouted ‘shoot the cop, shoot the cop.'”

“Rather than risk a New York appellate decision that might sweep more broadly than the facts in Diaz warrant, we complied with Justice Dwyer’s narrow order to reveal to him in camera only whether our source was one of the arresting officers.”

In order to decide if the Daily News had to reveal its source, the court reportedly used a New York “three-prong test.”  The court’s ruling (see here on the RCFP website) explained: “The rule may be stated this way: where a criminal defendant seeks press information that (1) is highly material, (2) is critical to the defendant’s claim, and (3) is not otherwise available, then the press privilege must give way in the face of the Sixth Amendment.”

“The Daily News will disclose to the court in camera whether the source of the relevant information was one of the two officers at the crime scene. If so, the subpoena will require an appearance by a witness from the Daily News.”

iMediaEthics is writing to Reporters Committee for Freedom of the Press for comment and will update with any response.