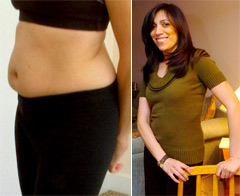 The New York Daily News’ coverage of a new beauty product skin cream read more like a spam e-mail than a news story showcasing a very ugly example of what’s passed off for journalism these days.

Nicole Lyn Pesce’s “article” on Rodial’s stomach tightening cream could easily have been written by the product’s makers. She calls the cream is a “miracle serum,” as well as a “phenomenon” and cites “rising demand across the globe” without bothering to include these allegedly staggering numbers that would verify this product to indeed be a global phenomenon she implies it is.

As if the gushing isn’t insulting enough to the reader’s intelligence, Pesce includes a bit of “science.”

In a snippet from the article sounding like a late night infomercial, Pesce asks:

“So how does it supposedly work? The tightener promises to reduce waistlines by 2 centimeters in two months, thanks to a stomach-flattening formula that uses microfibers to condense cells and firm the skin, plus natural proteins like neuro-peptides, fig extract and caffeine to boost metabolism and break down fat.”

This paragraph was lifted from Rodial’s Web site (and presumably their press kit, I wrote to ask) without as much as a citation:

For the record, what exactly are “stomach flattening micro fibers?” How can something boost your metabolism or break down fatty cells if it isn’t internalized? Neuropeptides are found in the brain. What do they have to do with stomach tightening? And most importantly, why didn’t the Daily News bother asking basic high school science questions like these rather than taking the manufacturer’s nonsensical claims and explanation at face value and publishing them? There simply was no balance in the “article” despite the fact that the products claims are controversial and poorly substantiated.

According to an article by the LA Times on the efficacy of tightening creams, there is little proof that anything sold in a bottle will effectively tone skin.

According to Kim, caffeine shrank fat cells in test tubes which is why the creams claim to work, but no studies have ever proven they work on actual people.

Kim also quoted a study done in 2005 where 34 women applied a caffeine-containing cream on their skin on one thigh and a placebo on the other. While the women said they noticed improvement, 1/3 of them were citing improvement from the placebo.

While it remains to be seen whether Rodial’s cream helps tone tummies, one thing desperately in need of tightening up is Nicole Lyn Pesce’s newsgathering techniques.