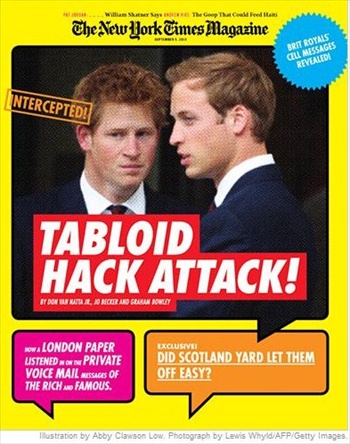 The New York Times' lengthy report accusing the News of the World of a widespread culture of phone hacking has spurred a controversy of its own. Most recently, New York Times public editor Arthur Brisbane weighed in on the debate.(Credit: NYTimes magazine)

The 6,000+ word report was published Sept. 5 and accused the UK’s “biggest-selling Sunday national” newspaper, The News of the World, of allowing – even somewhat encouraging – a “culture” of hacking phones to get scoops.

While Brisbane wrote that he found the story “did rely heavily on unnamed sources” with “roughly two-thirds of the attributions” to anonymous sources, “the story was grounded in very strong evidence.” Further, Brisbane opined that the story wasn’t old news, but “went beyond a rehash with new sources and a comprehensive treatment.  The larger question of whether the story was colored by the rivalry with Mr. Murdoch is more a matter of appearances.”

But, isn’t the mere appearance of bias just as bad as bias?  Brisbane cited the opinions of two journalism experts on the Times story, both agreeing with the Times’s decision to publish.  Columbia University’s graduate school of journalism dean Nicholas Lemann is quoted as saying that the story was too “good” for the Times to ignore, even if the New York Times and Wall Street Journal are competing.

Brisbane outlined some of the News of the World’s criticism of the article, including

He also noted that “Since publication of The Times’s article two weeks ago, the controversy over phone-hacking in Britain has been reignited, resulting in two new parliamentary investigations of the matter and an intense political fight that threatens to dislodge Prime Minister David Cameron’s top communications aide, Andy Coulson.”

Further, “The politics threaten to derail two important Murdoch objectives” — he is trying to buy the rest of satellite TV firm BSkyB, which “his adversaries want the government to block” and he wants to “clip the wings of the BBC, the government-financed competitor, whose budget the Cameron government is poised to cut.”

Because of those reasons and the Wall Street Journal’s “heated competition” with the Times, News of the World editor Bill Akass complained about “competitive bias” motivating the Times’ report.

“It stretches credulity to believe the decision to devote such resources to investigate an old story was an impartial act, uninfluenced by competitive rivalry,” Brisbane reported Akass said.

In a follow-up blog to his column, Brisbane posted the entirety of a Sept. 17 letter from Akass to him.  Akass’s letter listed some of his complaints and concern with The New York Times phone hacking story.

Brisbane reported that the Times’s executive editor Bill Keller said the Times expected The News of the World to respond with a competitive bias claim.  But, Keller “rejected the argument that The Times should recuse itself from doing such stories, or that its competitors should do likewise.” And as a result of the competition between the two media companies and the expected bias argument, Keller claims the Times “probably added another layer of caution to a process that is quite careful under any circumestance.”

“It was at least in the back of our minds that because Mr. Murdoch has declared war on The New York Times, a story centered on one of his newspapers had to bend over backwards to be seen as fair. In my view, the process was thorough and scrupulous.”

News of the World’s Akass also questioned the Times’s sources.  Brisbane wrote that Akass criticized the use of so many anonymous sources and “added that only one named source ‘claimed direct knowledge of wrongdoing, as opposed to hearsay or supposition. This is pretty thin evidence on which to hang a 6,000-word investigation.'”

Brisbane reported that Times’s investigations editor Matt Purdy said that the article was based on “extensive interviews” and that it was difficult to get sources to be named since it involved “journalists talking about potentially criminal acts and police officials talking about their own agency’s investigation.”

“We were surprised therefore to see the finished article was based almost entirely on anonymous sources – a ‘dozen former reporters’- whose credibility, seniority, motives or qualifications we are therefore prevented from challenging,” Akass wrote.

iMediaEthics reported earlier this month on the controversy.  See our post detailing the New York Times article and the News of the World response here.