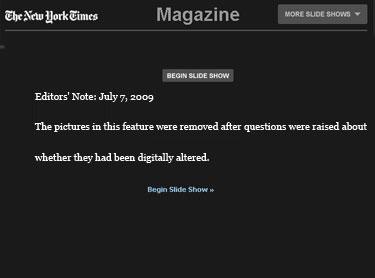 Here are the text elements from the New York Times Magazine photo gallery before editors made an official statement. The comments below will appear in tomorrow's print edition.

9:44pm EST New York : Here is the statement from the New York Times–just in from Diana McNulty, Times Public Relations. (She telephoned and sent an emailed statement, “Rhonda, Here’s the Editor’s Note that will run in the paper tomorrow”:

“A picture essay in The Times Magazine on Sunday, July 5 and an expanded slide show on NYTimes.com entitled ‘Ruins of the Second Gilded Age’ showed large housing construction projects across the United States that came to a halt, often half-finished, when the housing market collapsed.

“The introduction said that the photographer, a freelancer based in Bedford, England, ‘creates his images with long exposures but without digital manipulation.’ A reader, however, discovered on close examination that one of the pictures was digitally altered, apparently for esthetic reasons.

“Editors later confronted the photographer and determined that most of the images did not wholly reflect the reality they purported to show. Had the editors known that the photographs had been digitally manipulated, they would not have published the picture essay, which has been removed from NYTimes.com.”

UPDATED 07/09/09: 2:57am: EST:  Why does the Times say “a reader” was their source? ” Adam Gurno, aka, unixrat, their source for learning about the deceptions should be acknowledged, just like they do in their normal reporting. Why don’t they name the photographer and hold him accountable?

All of this lack of sourcing creates a troubling lack of transparency that hinders readers’ understanding of what actually happened. There are no links to any visual analysis–either from the Times’ or bloggers’–that prove what photo alterations were made or how they were done.

Times editors were fooled. Readers need to know how and why without having to scour the Internet.