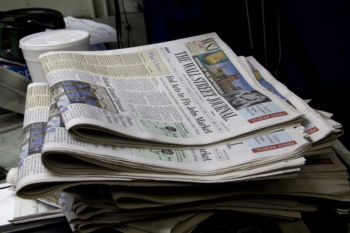 A New York antiquities dealer, Hicham Aboutaam, is suing the Wall Street Journal for suggesting he and his brother have sold items looted by ISIS.

The Journal‘s May 31 article, “Prominent Art Family Entangled in ISIS Antiquities-Looting Investigations,” reported that the Swiss, Belgian, French and U.S. authorities are “looking at” Aboutaam and his brother Ali Aboutaam “in connection with ISIS looting.” The Journal notes the brothers haven’t been charged with anything and their lawyer denies they “knowingly purchased or sold any looted items, let alone items looted by ISIS.”

iMediaEthics has made a list of the sources for claims about the Aboutaams; almost all are anonymous. U.S. Immigration and Customs Enforcement is the only agency cited by name in terms of the current alleged investigations; iMediaEthics has contacted ICE to see if it will confirm any investigation.

The Wall Street Journal‘s spokesperson Steve Severinghaus told iMediaEthics by e-mail, “The Wall Street Journal‘s article about investigations into the trafficking of material looted by ISIS was thoroughly reported, fair and wholly accurate. We fully stand by the article and will mount a robust defense to Hicham Aboutaam’s lawsuit.” iMediaEthics has written to Aboutaam’s lawyer for more information.

Courthouse News Service uploaded a copy of the lawsuit, which was filed in New York. In the lawsuit, Aboutaam repeats his denial of buying or selling any looted items, and he accuses the Journal of “ignoring months of assiduous attempts to guide and correct [Wall Street Journal] reporters’ misconceptions, misunderstandings, and incorrect assumptions.”

Further, Aboutaam’s lawsuit says he told the Journal he didn’t know of any investigation into his dealing, and notes that “not a single piece of information about any such investigation was attributed to an identified source or document” or came in “a direct quotation from any law enforcement official or anyone else.” The lawsuit quotes from the Society of Professional Journalists’ ethics code, the NPR ethics handbook and NYU’s Journalism Handbook about the use of anonymous sources.

“All of the allegations about ongoing investigations into connections between Plaintiff and ISIS looting are anonymously sourced or unattributed,” the lawsuit states. “The article does not even attempt to explain why anonymous sources were used or provide any context for the lack of attribution.”

The lawsuit also flags the Journal‘s print edition display of the article and images, arguing that the pairing of a large photo of Syrian ruins with a photo of the Aboutaam brothers suggests they were involved with the destruction in Syria.

Hicham Aboutaam’s Geneva-based brother, Ali, isn’t suing over the article because his business hasn’t been as affected, the New York Times noted.