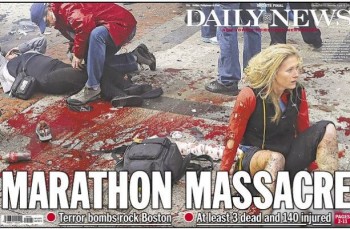 The New York Daily News Photoshopped the above image as its cover photo earlier this week. (Credit: Newseum/NYDN, screenshot)

Both The New York Daily News and New York Post have caught heat for their photojournalism ethics in reporting on the Boston Marathon explosions.

The New York Daily News defended doctoring its front-page photograph to make it less bloody.  As iMediaEthics wrote earlier this week, the Daily News Photoshopped a Boston Globe photograph from the explosions and used it as a front-page image. The photo showed three people on blood-covered ground. The Daily News fixed the photo to hide a gory injury to one woman’s ankle.

While the Daily News spokesperson, Ken Frydman of Source Communications, didn’t respond to iMediaEthics’ inquiry about the Photoshop job, Frydman did give Capital New York a statement claiming the photo was doctored in the interest of “sensitivity.”  Frydman said:

“The Daily News edited that photo out of sensitivity to the victims, the families and the survivors. There were far more gory photos that the paper chose not to run, and frankly I think the rest of the media should have been as sensitive as the Daily News.”

Meanwhile, the New York Post, which we called out earlier this week for errors in reporting on the explosions, ran a photo of two men carrying bags standing in a crowd at the marathon as its April 18 cover, suggesting the two were potential suspects. The headline read: “BAG MEN: Feds seek these two pictured at Boston Marathon.”

Don’t forget that the New York Post wrongly reported earlier this week that the authorities had a “Saudi Arabian national” suspect “under guard” in the hours after the explosions, despite police strongly denying those claims.

The story reported that “investigators…are circulating photos” of the two men pictured. Hours after publication, the FBI released photos of the two men they were seeking as suspects – the brothers Dzhokhar and Tamerlan Tsarnaev – who were very much not the same men in the Post’s cover image.

As ABC News reported, one of the people pictured on the Post’s cover, 17-year-old Salah Barhoun, denied any connection to the explosion and said he proactively went to the police after seeing his photo circulated.  He told the Daily News “I didn’t do it,” and that he was merely a spectator at the marathon with his bag containing workout gear.  “The only thing they look at is my skin color and since I’m Moroccan I’m kind of dark,” Barhoun is quoted as saying.

While the Washington Post’s Erik Wemple noted that there was a possibility the Post’s story “might well be true,” and that the authorities were looking for the two men for some reason. Wemple argued that in full context the Post was likely misleading readers into thinking the photo is “the key photo” in the investigation.   He added:

“Even the New York Post acknowledges in its story that it’s unclear if these fellows are the same people investigators are now zeroing in on. (CBS News has reported that they’re not). The upshot is that the New York Post randomly decided to throw a couple of fellows in front of the public and cast them in a suspicious, bag-men kind of light, even though the paper never IDs them as suspects.”

Regardless, Post editor Col Allan defended the cover.  He said in a statement yesterday:

“We stand by our story. The image was emailed to law enforcement agencies yesterday afternoon seeking information about these men, as our story reported. We did not identify them as suspects.”

Later, the Post reported in a follow-up story that the two pictured on its front cover were “cleared,” Salon noted.  That follow-up story was headlined “Two men probed in Boston Marathon bombings cleared by investigators.”

In an article for Reuters, columnist  Jack Shafer slammed the New York Post for its “cavalier manner about its errors.”

In light of the Post’s errors in reporting on the marathon with other media outlets and their corrections, Shafer wrote, “The Post, in contrast, appears not to care whether it gets a memorable story right or wrong. It only hopes to produce a memorable story, damn the truth value.”

It is perhaps ironic that Reuters itself rather cavalierly posted an obituary of George Soros yesterday, as we reported.