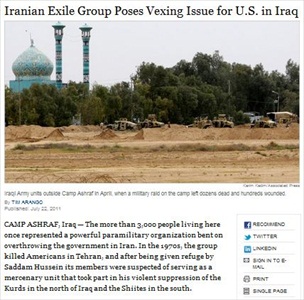 This July 22 article by Tim Arango was criticized for lack of balance because the perspective of the Iranian exile group in question isn't well-explained, NYT public editor Arthur Brisbane explained. (Credit: NYTimes, screenshot)

Arango wrote about his “visit” to Iraq’s Camp Ashraf with U.S. Ambassador Lawrence E. Butler. Arango “embedded” and “did not identify himself to the group” as “the camp has been off-limits to journalists,” according to Brisbane. Butler is trying to “negotiate with the People’s Mujahedeen of Iran (often referred to by the acronym MEK) to move them out of the camp,” according to Brisbane.

The article presents two related issues, Brisbane noted: Because Arango wasn’t identified to the camp as a reporter, he didn’t include comments by those who didn’t know he was a reporter.  As such, his story largely presented the side of Butler, the ambassador.

As explained by Brisbane, Arango’s article is “so heavily weighted with the ambassador’s words and point of view. The only direct quote from someone with the MEK is five words from an unidentified person claiming General Clark and other American speakers were not “doing it for the money.””  Even a representative from the MEK, Shahin Gobadi, contacted Brisbane criticizing Arango’s story for acting “like a soliloquy by the ambassador.”  As Gobadi is quoted as saying, Arango’s report suggests that Butler was “talking to a wall” because “there was not any response by Ashraf residents” to Butler’s quotes.

The U.S. currently considers the MEK a “terrorist organization.”

Brisbane noted that Arango did disclose to his editor, Susan Chira, that he never told the camp he was a reporter.  Since Arango and Chira agreed that they couldn’t report “any comments made by camp residents,” he asked the MEK for comment at his editor’s suggestion. But, Brisbane stated that “so little” of those comments were included.

Brisbane agreed with Chira’s permission of the undercover reporting, but did criticize the Times for not  including both sides of the story.