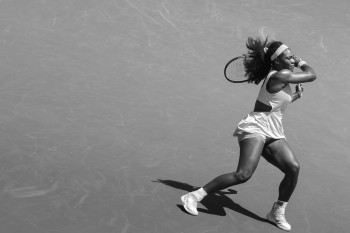 Serena Williams winning her eighth Key Biscayne, Miami Open title. She has not been beaten in 2015 and this is her 21-match winning in a row. (Credit: Jimmy Baikovicius via Flickr)

A New York Times article on Serena Williams and other female athletes’ bodies this past week was “a missed opportunity,” public editor Margaret Sullivan wrote Monday.

The July 10 article,”Tennis’s Top Women Balance Body Image with Ambition,” focused on, through interviews, the bodies and body image of athletes like Williams, who just won Wimbledon again, Agnieszka Radwanska, Andrea Petkovic, and others.

“Her rivals could try to emulate her physique, but most of them choose not to,” the Times noted.

In contrast to Williams, who the New York Times noted has been on the cover of Vogue and “is regarded as symbol of beauty by many women,” two other current tennis players featured are described as small and feminine. Williams said she is “really happy with my body type and I’m really proud of it.”

Other athletes described what they want their bodies to look like as well, but the first half of the piece seemingly describes Williams in contrast with others. The article also credited Williams for her strong body, quoting former tennis player Pam Shriver saying Williams is a model for others.

But, readers slammed the article saying it was “racist and sexist,” public editor Sullivan wrote. “They were deploring the article’s timing, which focused on body image just when Ms. Williams was triumphing at Wimbledon. The article, they said, harmed progress in bringing equality and recognition to women’s sports — something happening that very day with New York City’s first ticker-tape parade for a team of female athletes, the World Cup champion United States soccer team.”

That wasn’t the intent, though. Ben Rothenberg, the reporter, told iMediaEthics he pitched the idea after spending so much time around women tennis athletes.

“As I’ve spent more and more time around the tour, I’ve picked up on more and more issues that affect these players, and body image was definitely one of them,” Rothenberg said. “It’s been in my notebook as a story idea to do for a while now, and eventually got greenlit for Wimbledon.”

He also pointed to his experience covering “all sorts of issues regarding women’s tennis over the past few years,” including “inequal TV coverage to the (lack of) need for weight listings on player profiles to, more recently, stalkers.”

So where did the article go wrong?

Rothenberg acknowledged to Sullivan, “I should have challenged the norms rather than just stated them as a given,” when covering body types.

“He also said that a late decision to rewrite the top of the piece, putting more attention on Serena Williams, had the unfortunate effect of creating a ‘Serena versus everybody else’ split,” Sullivan reported of her conversation with Rothenberg.’

For her part, Sullivan wrote, “I see this article as a missed opportunity to really get under the surface of a pervasive and troubling issue in women’s sports and, particularly, women’s tennis.”

Further, she pointed out the bad timing of the article around Williams’ Wimbledon win and commented, “Most of all, it’s unfortunate that this piece didn’t find a way to challenge the views expressed, instead of simply mirroring them.”

Rothenberg told iMediaEthics he was pleased Sullivan addressed the concerns of readers and reminded that his article was a news piece.

“I think ultimately she reached many of the same conclusions others did, which was that it was a missed opportunity to touch on lots of other issues,” Rothenberg wrote in an e-mail to iMediaEthics. “But, in the scope of one article, especially one that was not a column or any sort of opinion piece, I think my approach of presenting facts and quotes with minimal judgment (for better or worse) was how the story sort of had to be in its genre.”

However, Rothenberg called out one comment in Sullivan’s piece that he said he “completely” disagrees with — an academic arguing the article was “presenting Serena as some kind of freak, or animal-athlete.”

“I/we did nothing of the sort whatsoever,” Rothenberg responded. “We made it clear that Serena was a champion who had set a standard for excellence and self-acceptance (and beauty, as made clear by mentioning her recent Vogue cover), and all comments that we in any way diminished or dehumanized Serena are, I think, entirely off-base. ”

Rothenberg said he hasn’t heard from any of the athletes he featured in the article, but has of course seen the Twitter reaction.

“There have been lots of smart, salient points raised by people about issues that the article glosses over (race, homophobia, etc) and I’ve been really happy to see a lot of thoughtful conversations and takes emerge now, a couple days later, after what was initially some fairly (I think) hasty outrage and bile after the @nytimes account first blew up the story on Twitter.”

Given Sullivan’s point that the article raised issues that could be more deeply explored in another article, iMediaEthics asked Rothenberg if he plans to do a follow-up article to pursue some of those areas.

“As I said, I’m thrilled at all the conversations and thoughtful writing that has come out of it now as the dust has settled, and hope that it continues,” Rothenberg e-mailed. “While I personally don’t have any immediate plans for a direct follow-up, I’m going to keep writing about women’s tennis and the myriad issues it raises and faces, which will certainly include many of the things she and others have mentioned. “

For better or worse, I've seen nearly everything said re: my body image article, directly to me or not, and I truly appreciate the feedback…

…It quickly became clear that Twitter and this issue do not mix, so replying here is futile, but I discuss it more tomorrow on @ncr_tennis…

…and I'm happy to discuss it more in other formats however you want. I still believe that body image is a topic worthy of writing about…

…and hope this sparks more discussion, with Serena as a perfect model for excellence + self-acceptance (as she was in the story all along).