NYT David Brooks on his Sequestration Column: 'I probably went a bit too fa

NYT David Brooks on his Sequestration Column: ‘I probably went a bit too far’ 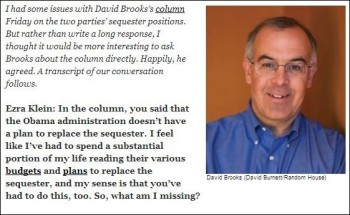 After being called out by the Washington Post’s Ezra Klein, New York Times’ conservative columnist David Brooks added a “postscript” to his column on the sequester to admit that one of his points wasn’t “fair to suggest.”

Klein published a Q & A with Brooks this past week in which he challenged Brooks’ opinion column, claiming

“The president hasn’t actually come up with a proposal to avert sequestration, let alone one that is politically plausible.”

Klein argued that there have been “various budgets and plans to replace the sequester” and Brooks admitted that he “probably went a bit too far” with his claim.  Brooks told Klein:

“First, the column was a bit of an over-the-top lampooning column about dance moves. I probably went a bit too far when saying the president didn’t have a response to the sequester save to raise taxes on the rich. In the cool light of day, I can say that’s over the top. There’s chained CPI and $400 billion in health proposals. So I should say I was unfair. I’m going to attach a note to the column, if it’s not up already.”

The now-attached “postscript” reads in full:

“The above column was written in a mood of justified frustration over the fiscal idiocy that is about to envelop the nation. But in at least one respect I let my frustration get the better of me. It is true, as the director of the Congressional Budget Office has testified, that the administration has not proposed a specific anti-sequester proposal that can be scored or passed into law. It is not fair to suggest, as I did, that tax hikes for the rich is the sole content of the president’s approach. The White House has proposed various constructive changes to spending levels and entitlement programs. These changes are not nearly adequate in my view, but they do exist, and I should have acknowledged the balanced and tough-minded elements in the president’s approach.”

Check out Klein’s Q & A with Brooks.

NYT David Brooks on his Sequestration Column: ‘I probably went a bit too far’

Lawsuit against U Mass student newspaper over police blotter story thrown out
Coronavirus errors: More news media corrections include how to disinfect