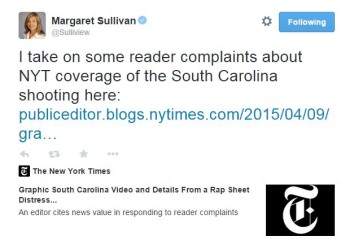 “I see nothing in the overall reporting and handling of this story that amounts to victim-blaming,” Sullivan wrote. “In fact, quite the contrary: The Times went out of its way to show that the police officer’s account didn’t jibe with videotaped reality.”

Scott was fatally shot last weekend by North Charleston, South Carolina police officer Michael Slager. This week, witness Feidin Santana provided cell photo video of the shooting, which showed that Slager shot Scott eight times in the back as he ran away. Slager was then quickly charged with murder.

Readers complained to Sullivan about “two aspects of the coverage,” she blogged this morning  –“The use of the violent video of the shooting, and the juxtaposition of the victim’s arrest record with positive biographical information about the police officer.”

The Times explained its decision to publish the video of the shooting because of its news value. The video also contradicted the officer’s previous account of what happened.

Editor Rebecca Corbett told Sullivan “This was a very powerful record of a violent episode.”

“We thought it had very significant news value — and that is the standard we apply, including in coverage of war zones.”

She added that “it provided very critical information that called into question and raised profound questions” about the shooting and noted that the Times included a warning to viewers that the video was graphic.

The Times‘ video contains a warning to readers that it is “graphic.”

Meanwhile, last night, a day after the video had been released, NBC Nightly News aired clips from the video without any apparent warning to readers of its nature.

The Post and Courier noted that the news of the video was not a New York Times scoop and confirmed it had the screenshot and video.

@ShortFormErnie It is not an NYT scoop. They had video shortly before others, but @postandcourier had story/stills way before. @ABC involved

There is a video, and it will be posted soon. All we can say right now. Keep following @postandcourier, @offlede, @celmorePC, @mboughtonPC

Pugh confirmed that the Times got the video published first.

“Officer Slager served in the Coast Guard before joining the force five years ago, his lawyer said. The police chief of North Charleston did not return repeated calls. Because police departments are not required to release data on how often officers use force, it was not immediately clear how often police shootings occurred in North Charleston, a working-class community adjacent to the tourist destination of Charleston.”

After reporting that information about Slager, the Times then listed Scott’s arrest record, noting that Scott’s brother suggested Scott ran from police because of child support.

“Mr. Scott had been arrested about 10 times, mostly for failing to pay child support or show up for court hearings, according to The Post and Courier newspaper of Charleston. He was arrested in 1987 on an assault and battery charge and convicted in 1991 of possession of a bludgeon, the newspaper reported. Mr. Scott’s brother, Anthony, said he believed Mr. Scott had fled from the police on Saturday because he owed child support.”

Sullivan concluded that the Times did a good job reporting but she noted she does have “qualms” about the biographical information presentation.  She wrote:

“Having back-to-back paragraphs about the police officer’s Coast Guard record and Mr. Scott’s arrest record certainly is an unfortunate juxtaposition. I wouldn’t go so far as to say the arrests should have been omitted from the story; the child-support information certainly was germane.  Even under deadline pressure, though, more awareness could have been brought to bear about the way the information was ordered and presented.”

The Times‘ Corbett said the Times had to include the information about Scott’s child support debt and past arrest record because it was relevant.

“We try to give as complete an account of someone’s biography as possible, and while we don’t use information that is irrelevant, this was a law-enforcement encounter,” Corbett told Sullivan.

By reporting on his arrest record, Corbett said the Times was informing readers Scott “didn’t have a violent record.”

Corbett also pointed out that the story was breaking news developing quickly.