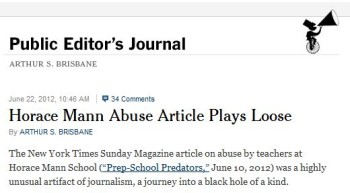 Brisbane wrote that the article, on “abuse by teachers at Horace Mann School,” lacked substance and objectivity.  “Most of the allegations dated back 30 years,” he added.

“The broad objective of the piece was legitimate,” he wrote, but it featured “thinly-supported assertions and loose characterizations.”  For example, he wrote that the article didn’t include any on-the-record alleged victims, any comment from the administration, or any interview with the accused, who “are now dead.”  While some claims had “a reasonable amount of evidence,” one set “were quite vague.”

In terms of objectivity, Brisbane noted that both “the article’s author, [Amos] Kamil, and editor, Ariel Kaminer, were both Horace Mann graduates themselves.”  Kamil “clearly disclosed” his relationship, but by having two graduates involved with the piece, Brisbane argued “this eliminated an element of objective distance.”

In response, Times magazine editor Hugo Lindgren told Brisbane that ” The story was reported, edited and fact-checked according to all our standards. Many non-HM graduates were involved in the editing process.”  He also defended Kamil and Kaminer’s objectivity and wrote that “the article stands on its own today.”  Lindgren wrote that  the magazine “did not pick” three dead accused teachers “because they were dead and could not defend themselves” but because “those were simply the stories we were able to verify through multiple sources.”