NYT Public Editor: Where are Boundaries Btwn News & Editorial? 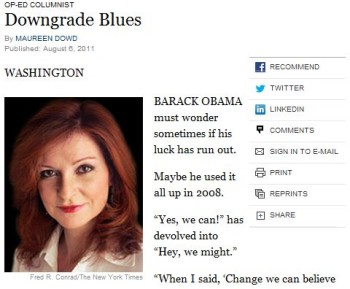 This Maureen Dowd column was sent to a CIA spokesperson before publication. (Credit: NYTimes, screenshot)

According to Politico, “conservative watchdog group” Judicial Watch found out about the pre-publication look through a Freedom of Information which revealed Mark Mazzetti’s email to “CIA spokeswoman Marie Harf” of an August 2011 Maureen Dowd column that included commentary on Osama bin Laden’s killing and the forthcoming movie of the killing. Mazzetti is a “national security” correspondent for the Times.

Outgoing Times public editor Arthur Brisbane commented on the case, calling it a “problem of boundaries.” Brisbane noted Judicial Watch’s interest in this incident was “just a piece of a larger picture…which centered on the claim that the Obama administration has tried to exploit the killing of Osama Bin Laden for political gain.”

According to Brisbane, Mazzetti’s providing the column crossed “boundaries” including “to disclose a potentially sensitive article pre-publication under such circumstances” and by crossing “the oft-cited wall separating news from editorial.” He explained:

“After all, in this case a news-side person was fact-checking for a colleague working on the opinion side.”

According to Brisbane, Mazzetti called providing the column to the CIA “a mistake” that he hasn’t “done…before” or “will” repeat.

We wrote to the New York Times asked for response to Brisbane’s criticism and why Mazzetti was fact checking for the editorial side.  Times spokesperson Danielle Rhoades Ha provided the following statement as the Times’ “comment on the matter:”

“Last August, Maureen Dowd asked Mark Mazzetti to help check a fact for her column. In the course of doing so, he sent the entire column to a CIA spokeswoman shortly before her deadline. He did this without the knowledge of Ms. Dowd. This action was a mistake that is not consistent with New York Times standards.‬‬”

Previously, Politico reported that the Times‘ Dean Baquet said “I know the circumstances, and if you knew everything that’s going on, you’d know it’s much ado about nothing… I can’t go into in detail. But I’m confident after talking to Mark that it’s much ado about nothing…The optics aren’t what they look like.”  Politico argued: Baquet’s “statements amount to a plea to readers to take it on faith that Mazzetti’s leak was ethically sound.”

Brisbane reported that New York Times executive editor Jill Abramson added that Mazzetti “was not doing the CIA a favor” by sending the column and that he “is an experienced, terrific reporter.”

Gawker reminded that earlier this summer Gina Chon left the Wall Street Journal for what Dow Jones called “sharing certain unpublished news articles with Brett McGurk, then a member of the U.S. National Security Council in Iraq.”  As we wrote at the time, the Journal said the incident was a violation of its conduct code.

We wrote earlier this summer about the practice of quote approval, highlighted by the New York Times in a report revealing that some news outlets have let political campaigns give the final OK before publishing quotes.

NYT Public Editor: Where are Boundaries Btwn News & Editorial?