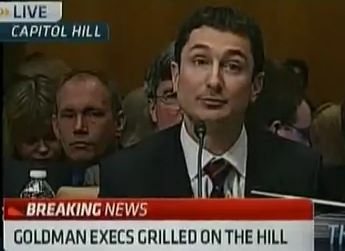 The New York Times’ May 31 article reported on the Securities Exchange Commission’s case against Goldman Sachs vice president Fabrice Tourre. The Times described Tourre as “the face of mortgage securities fraud.”  But, what’s of interest is the Times’ citing Tourre’s “legal replies, which are not public” in its article.

The Times disclosed that it got those e-mails from artist and filmmaker Nancy Cohen (also known as Nancy Koan), who gave them to The Times after a friend gave her “the materials in a laptop” in 2006. The Times explained:

“The friend told her he had happened upon the laptop discarded in a garbage area in a downtown apartment building. E-mail messages for Mr. Tourre continued streaming into the device, but Ms. Cohen said she had ignored them until she heard Mr. Tourre’s name in news reports about the S.E.C. case. She then provided the material to The Times.”

Salmon questioned if the Times hacked Tourre’s e-mails “in much the same way as the News of the World was hacking into private voicemail,” citing the Times disapproval of that practice. While Salmon provided possible alternatives to how the newspaper could have gotten the e-mails without hacking the computer, he noted “it’s also pretty improbable.”

Salmon noted that Cohen’s spokesperson, Curtis Ellis, commented that Cohen didn’t read Tourre’s e-mails, but she did download them and about a year later gave them on an external hard drive to the New York Times.

“If this story is true, then it does pretty much exonerate the NYT from allegations of hacking — Cohen really did simply deliver all of Tourre’s emails to the NYT, long after he was in the news, in a one-shot deal. It sounds pretty crazy, to be sure. But weirder things happen in New York every day.”

In updates to his post, Salmon added that a 1986 Stored Communications Act prohibits “intentionally accesses without authorization a facility through which an electronic communication service is provided.”

Likewise, an attorney, Maxwell Kennerly, wrote on his blog, Litigation and Trial, that “it seems the NY Times might have a wee bit of a problem here.”  Read Kennerly’s post here for more information on the Stored Communications Act.

Salmon also reported that the Times issued a statement (See here on Business Insider’s website) denying that the Times hacked or requested hacking. The Times stated, in part:

“We are confident that our receipt and use of those documents was in keeping with our journalistic standards and complied with the law.”

In a statement to Yahoo News, the New York Times further denied any hacking.  The statement reads:

“As we disclosed in our story, certain documents were provided to us by a named source. The Times did not ‘hack’ any email accounts or ask anyone to do so.”

iMediaEthics is writing to the New York Times for further details and will update with any response.