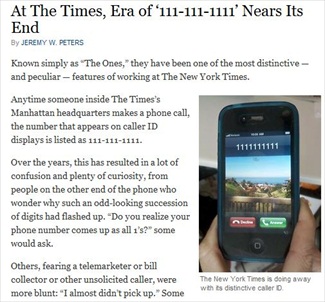 The New York Times announced Aug. 12 that it will no longer mask its NYT phone number with the caller ID number 111-111-111.

Instead, starting Aug. 15, the newspaper’s “main number,” 212-556-1234 will be the newspaper’s caller ID display. However, the Times explained the move not as a step for transparency, but instead in anticipation of “an expected change to federal law that will require legitimate caller ID signatures.”

The Times’ telecommunications manager Lorraine Bellagamba claimed in the newspaper’s announcement that the 111-111-1111 phone number was “intended to help the newsroom protect its sources” in case of a subpoena. iMediaEthics is writing to the Times to ask if the change will now limit that protection of sources. We will update with any response.