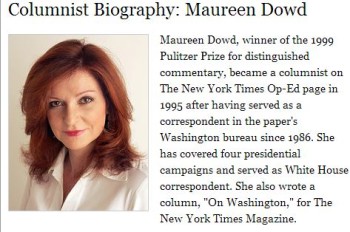 Dowd’s story originally reported that McCray said Quinn is “not accessible … She’s not the kind of person I feel I can go up to and talk to about issues like taking care of children at a young age and paid sick leave.”  Quinn slammed McCray’s comments as a remark on her being a “childless lesbian,” Politico and New York magazine explained.

But the full quote, which the Times has now published on its website, reads:

“Well I am a woman, and she is not speaking to the issues I care about and I think a lot of women feel the same way. I don’t see her speaking to the concerns of women who have to take care of children at a young age or send them to school and after school, paid sick days, workplace, she is not speaking to any of those issues.  What can I say?  And she is not accessible, she is not the kind of person who you can talk to and go up to and have a conversation with about those things, and I suspect that other women feel the same thing I’m feeling.”

New York Magazine published the audio of the interview, provided by the de Blasio campaign, to show the real quote. After the correction and Dowd’s admission of a misquote, de Blasio’s campaign responded to Quinn’s criticism, New York magazine reported:

“As the transcript makes clear, her actual comments were about Speaker Quinn’s unwillingness to listen to the people on education, and paid sick leave, and any suggestion otherwise is disingenuous and absurd … It is wrong for Speaker Quinn and her campaign to distort and confuse with baseless attacks in order to distract from the Speaker’s indefensible policy record.”

Politico reported that Dowd said the error was caused by her interview being conducted in a “noisy” place so her “tape recorder didn’t pick up everything.” Dowd added that she “apologized to the DeBlasio and Quinn campaigns.”

The New York Times has also posted a correction on its website that reads:

“An earlier version of this column incorrectly quoted a response by Chirlane McCray, the wife of Bill de Blasio to a question about Christine Quinn. The column has  been updated to reflect the full response. In addition, the column misstated the place where the interview occurred. It was the Good Stuff Diner, not the Good Times coffee shop.”