OK for Nigel Farage to say ‘Jon Snow should be attacked’ 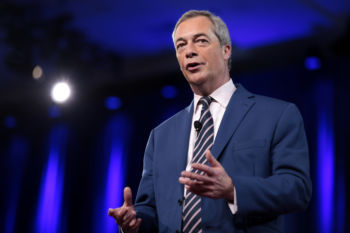 Farage’s comments on March 31 prompted seven complaints to UK broadcast regulator OfCom. On his program, he had been talking with British journalist and broadcaster Alastair Campbell, who asked “Will you unequivocally condemn people who attack journalists, like Trump does, and also attack police and the Cenotaph?” Campbell also served as Tony Blair’s spokesperson.

A Channel 4 spokesperson told iMediaEthics that neither it nor Snow complained to OfCom over the comments. iMediaEthics has written to LBC Radio.

In response, Farage said, “Well I think Jon Snow should be attacked without doubt but that’s slightly a separate issue.” When Campbell asked why, Farage responded, “because of his terrible condescending bias.” Then, after a commercial break, Farage read a reader tweet about his Snow comment and Farage denied he was inciting violence and instead argued he was calling for Snow to be “verbally attacked.”

In response to the complaints, LBC Radio argued the comments were fine because Farage told Campbell he would “unequivocally condemn people who attack journalists,” he clarified his remark as a verbal criticism not physical attack, and the conversation included Campbell “robustly” responding to Farage.

OfCom found that Farage’s comments “had the clear potential to be interpreted by the audience as a reference to the use of physical violence against Jon Snow” and therefore had “the potential to cause significant offence to listeners.” Futher, OfCom said there was “an ambiguity around whether Mr Farage’s statement was to be taken literally or metaphorically” causing a “clear potential for offence” for listeners who thought the comment was “highly inflammatory and provocative.”

However, OfCom found that Farage’s clarification in response to the tweet helped give “further contextualisation.” Because of that OfCom dismissed the complaint. “Taking all the elements above into consideration, it was our view that the potential significant offence caused by Mr Farage’s ambiguous statement was sufficiently contextualised,” OfCom wrote. OfCom also called for broadcasters to ensure they provide context on any “ambiguous statements” that the public may find “highly inflammatory and provocative.”

OK for Nigel Farage to say ‘Jon Snow should be attacked’