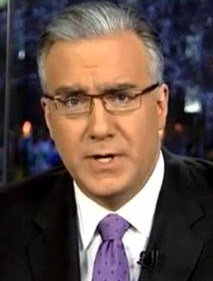 Keith Olbermann, pictured above in a screenshot detail from a YouTube video, is back on the air at MSNBC. (Credit: MSNBC, YouTube)

In a Nov. 7 statement, MSNBC president Phil Griffin explained Olbermann would be reinstated at the network by tonight’s broadcast of his show Countdown with Keith Olbermann.

“[A]fter several days of deliberation and discussion, I have determined that suspending Keith through and including Monday night’s program is an appropriate punishment for his violation of our policy,” Griffin stated.

Olbermann tweeted about his reinstatement Nov. 7:  “Greetings From Exile! A quick, overwhelmed, stunned THANK YOU for support that feels like a global hug & obviously left me tweetless XO.”

The Associated Press noted that quickly after Olbermann’s suspension was announced Nov. 5, the Progressive Change Campaign Committee launched a petition for Olbermann to be back on the air.

By Nov. 7, the petition reportedly had more than 300,000 signatures.  (Now, the organization is promoting “national congrats cards” to Olbermann.)

Ethicist Kelly McBride of the Poynter Institute weighed in on the suspension, noting that lately “personalities … eclipse the journalism that these organizations do,” the Associated Press reported.

Meanwhile, NBC’s decision to suspend Olbermann was criticized because fellow MSNBC host Joe Scarborough had donated to a political candidate in 2006. Salon reported that NBC OK’ed Scarborough’s donations because he requested permission prior to donating.

Olbermann’s colleague at MSNBC, Rachel Maddow, suggested that the suspension was to prove a point that MSNBC differs from Fox News, Politico reported.  While Fox News hosts and owners publicly donate to conservative candidates without repercussion, the suspension of Olbermann for donating to three Democratic candidates indicates the network isn’t “a political organization,” she asserted.

“Yes, Keith’s a liberal, and so am I, and there are other people on this network whose political views are shared openly with you, our beloved viewers,” she is quoted as saying. “But we are not a political operation. Fox is. We are a news operation. And the rules around here are part of how you know that.”

Olbermann apologized to his viewers yesterday, The New York Times reported. Olbermann also criticized NBC for having an “inconsistently applied” policy toward political donations and claimed he was unaware it was against company policy to donate to political campaigns.  Further, he stated that he found out he was suspended not from the company but from the media.

The Times published the following statement:

“You should also know that I did not attempt to keep any of these political contributions secret; I knew they would be known to you and the rest of the public. I did not make them through a relative, friend, corporation, PAC, or any other intermediary, and I did not blame them on some kind of convenient ‘mistake’ by their recipients. When a website contacted NBC about one of the donations, I immediately volunteered that there were in fact three of them; and contrary to much of the subsequent reporting, I immediately volunteered to explain all this, on-air and off, in the fashion MSNBC desired.”

StinkyJournalism is writing MSNBC news to ask for their policy statement for journalists. We will post here if we get a response.