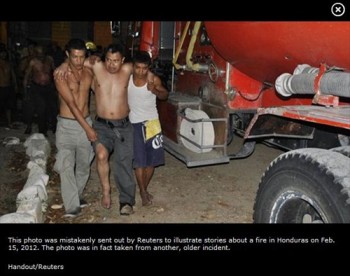 See above the photo in question. (Credit: Reuters/Globe and Mail/ Associated Press, screenshot)

The Globe and Mail ran an old photo with its February 16 coverage of a fire in Honduras, the newspaper’s public editor Sylvia Stead wrote.

The fire killed “350 prisoners,” according to Stead, and the Globe and Mail’s coverage included three photos of the fire by the Associated Press. But, the fourth photo was “from an earlier prison fire in Honduras” and was sent by Reuters.  The mistake was because of “a mix-up in labeling of a file.”  Reuters “caught its own error quickly” and sent out a “disclaimer that the photo was not current,” Stead wrote.

Stead told iMediaEthics by e-mail that her column on the photo error and a correction were published in print.  The correction was published on Feb. 17th’s edition on A2 and read:

“A photograph from Reuters that on Thursday accompanied a story on a prison fire in Honduras appears to show an earlier prison fire in 2004, according to a Reuters spokesperson.”

However, a search of Reuters’ website still produces the photo in question.  See here the photo in Reuters’ slideshow “Honduras prison fire.”  The photo’s caption reads: “Inmates help each other after a fire broke out in the prison in Comayagua, February 15, 2012.  REUTERS/Handout.”

We wrote to Reuters to ask for more information about the photo.

A Reuters spokesperson told iMediaEthics by e-mail that “We can confirm that five pictures forming part of Reuter’s coverage of the Honduras prison fire were removed from circulation, as we now believe the pictures show an earlier prison fire from 2004. The pictures were issued with a disclaimer and were removed as soon as the problem was discovered. We are conducting a full investigation into the matter.”

We have also asked about the older photo still published with the 2012 coverage here. We will update with any response.

The Globe and Mail’s Stead used this incident to explain what the newspaper’s policy is for photojournalism.  She wrote:

“News images are documentary images and must not be manipulated, combined or distorted. They cannot be staged or re-enacted. However, subjects in portrait, studio and fashion shoots may be directed and posed by photographers.”

She also added that the newspaper’s photo editor Dennis Owen emphasizes the need for transparency in photos.

See here some of the Globe and Mail’s photos to accompany its reports on the fire in Honduras.