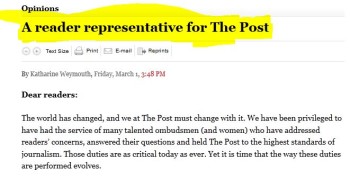 The Washington Post announced today that it won’t replace Patrick Pexton, whose two-year term as ombudsman ended yesterday, with another ombudsman. Instead, the newspaper plans to “appoint a reader representative shortly to address our readers’ concerns and questions.”

As the Post explained in a note from publisher Katharine Weymouth:

“Unlike ombudsmen in the past, the reader representative will be a Post employee. The representative will not write a weekly column for the page but will write online and/or in the newspaper from time to time to address reader concerns, with responses from editors, reporters or business executives as appropriate.”

iMediaEthics is writing to the Organization of News Ombudsmen’s Jeffrey Dvorkin for comment on this move. We’ll update with any response.