Parliamentary Report: Rupert Murdoch 'not a fit person to exercise the stewardship of major international company'

Parliamentary Report: Rupert Murdoch ‘not a fit person to exercise the stewardship of major international company’ 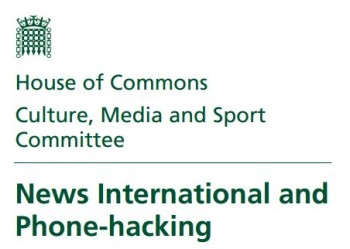 The UK Parliamentary Committee on Culture, Media and Sport Select released its report on the UK phone hacking scandal on May 1.

The report, see here, is entitled “News International and Phone-hacking.”  Bloomberg News noted that “The 11-member committee has been working on its report since July” when News of the World was shut down.

The committee concluded that because News Corp. CEO Rupert Murdoch “turned a blind eye and exhibited wilful blindness to what was going on in his companies and publications,” he is “not a fit person to exercise the stewardship of major international company,” the Guardian reported.

The Guardian noted that the report was highly critical of Rupert and James Murdoch and “accused” Les Hinton, Colin Myler and Tom Crone of “misleading parliament.”   The Guardian added:

“All three executives now face the prospect of being called to apologise before parliament, in a constitutional move that has not been used for almost half a century.”

However, according to the Guardian, Myler defended  “the evidence that I gave the committee” and Hinson denied the committee’s “accusations” of being “complicit” in hiding the scandal.  In sum:

“Hinton, Crone and Myler each released statements denying that they misled parliament.”

The New York Times also published an “internal memo” from Rupert Murdoch responding to the parliamentary report. He wrote in part

“We certainly should have acted more quickly and aggressively to uncover wrongdoing. We deeply regret what took place and have taken our share of responsibility for not rectifying the situation sooner.”

Further, he noted that News Corp. “continues to cooperate with all inquiries” into phone hacking and bribery.  He wrote that News Corp.’s Management and Standards Committee finished its reviews of the Times of London, the Sunday Times and the Sun and said that there was “no evidence of illegal conduct other than a single incident reported months ago, which led to the discipline of the relevant employee.”

The New York Times also published News Corp.’s statement on the parliamentary report, which it wrote included both “hard truths” about News of the World and “unjustified and highly partisan” commentary.

More from the Report

The report explains that it is to determine “whether or not there is good evidence to suggest that the Committee and its predecessor Committees have been misled by any witnesses…on the phone-hacking scandal.”

The committee’s report credited the Guardian as one of the main parties to bring “many of the issues…to light.”  The report noted that it focused on News of the World’s “so-called ‘investigations'” into wrongdoing, Clive Goodman’s claims, the “for-Neville” e-mail, the 2009 Gordon Taylor settlement and the Milly Dowler hacking. In the Gordon Taylor payment, James Murdoch approved a $1.1 million settlement to Taylor in a case that could have indicated widespread knowledge of phone hacking at News of the World, as we wrote.

The committee wrote that the Gordon Taylor payment was so high because of the confidentiality it brought and that “keeping the settlement out of the public eye was absolutely central to the agreement.”  In this matter, the committee found that Tom Crone “misled the committee” because he was aware of this.

The report added that “It is true that News International has cooperated more fully with our current investigation than it did with our inquiry in 2009, although the standard was hardly very high at that time.”

“The willingness of News International to sanction huge settlements and damaging, wide-ranging admissions to settle civil claims over phone-hacking before they reach trial reinforces the conclusion of our 2010 Report that the organisation has, above all, wished to buy silence in this affair and to pay to make this problem go away.”

The report also determined that “News International repeatedly made misleading and exaggerated claims regarding the ‘investigations’ it had purportedly commissioned following  the arrests of Clive Goodman and Glenn Mulcaire.”

With regards to News International’s payments to former News of the World royal editor Clive Goodman who was fired and convicted of phone hacking in 2007, the committee questioned why it wasn’t a warning flag and suggestive of News International’s “motives” to hide other wrongdoing.

“Colin Myler, Tom Crone and Jonathan Chapman should certainly have acted on information they had about phonehacking and other wrongdoing, but they cannot be allowed to carry the whole of the blame, as News Corporation has clearly intended. Even if there were a ‘don’t ask, don’t tell’ culture at News International, the whole affair demonstrates huge failings of corporate governance at the company and its parent, News Corporation.”

The committee also questioned the information Rupert Murdoch has given the public and the differences between when Murdoch shows “excellent powers of recall and grasp of detail, when it has suited him” to when Murdoch says he can’t remember information like when he found out that “the ‘one rogue reporter’ line was false.”  The committee wrote:

“On the basis of the facts and evidence before the Committee, we conclude that, if at all relevant times Rupert Murdoch did not take steps to become fully informed about phone-hacking, he turned a blind eye and exhibited wilful blindness to what was going on in his companies and publications.  This culture, we consider, permeated from the top throughout the  organisation and speaks volumes about the lack of effective corporate governance at News Corporation and News International. We conclude, therefore, that Rupert Murdoch is not a fit person to exercise the stewardship of a major international company.”

On the Milly Dowler hacking, the committee indicated Rebekah Brooks, who edited News of the World when Dowler’s phone was  hacked and later went on to become News International’s CEO before resigning last year, would be at fault for this incident, but wrote that the committee would “refrain from drawing conclusions” in this case since there may be “criminal charges.”  The committee wrote:

“Impersonating members of a missing girl’s family; besieging an employment agency; falsely asserting cooperation with the police; falsely quoting the police; and, according to their own account, obtaining Milly Dowler’s mobile telephone number from her school friends are hardly the actions of a respectful and responsible news outlet. For those actions, and the culture which permitted them, the Editor should accept responsibility.”

Parliamentary Report: Rupert Murdoch ‘not a fit person to exercise the stewardship of major international company’