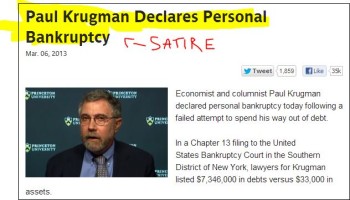 Breitbart.com unpublished a story after being hoaxed by a satire site’s story that had claimed New York Times columnist Paul Krugman was bankrupt, according to Slate.

Media Matters posted a screenshot of the post by Breitbart.com editor Larry O’Connor, which criticized Krugman, describing him as  “the economic darling of the left,” and claimed he had “an AMEX bill reaching $84,000 in one month and charges for Portugese wines and a dress from the Victorian period.”

The original source of that phony story was the Daily Currant, the same satire site behind the story Sarah Palin was going to work at Al Jazeera. As iMediaEthics wrote last month, the Washington Post’s Suzi Parker fell for the Daily Currant’s story on Palin’s (fake) new job. The Post published a correction, but Daily Currant founder Daniel Barkeley told us that Parker not only fell for its story, but also altered a quote from its article.

But, even though The Daily Currant originated the Krugman bankruptcy story, Breitbart.com sourced Boston.com, the website for the Boston Globe, according to Media Matters,

Slate explained that Breitbart.com got taken in by the Krugman tale via a game of Telephone — the Daily Currant’s story made its way to Boston.com after an Austrian site translated the Currant story, a blog translated back that information but dropped any reference to the Daily Currant, and Boston.com published the blog. According to Slate:

“If you follow the links, that Boston.com report was actually a brief from financial blog Prudent Investor, and not from the Boston Globe‘s editorial staff as the domain name might imply. The PI post in turn cites Austria’s Format magazine, which had reprinted a translated version of an original story from—you guessed it!—the Daily Currant. If you run the German through Google translate, you can see that the post even includes a disclaimer at the bottom that reads: “The source of this ‘message’ is the satirical magazine ‘The Daily Currant’, the truth of the message accordingly low.”

That disclaimer is even in bold. and links to the Daily Currant’s story.

The Boston.com post has since been deleted and the link goes to an Error page but Mediaite has a screenshot. According to the Washington Post’s Erik Wemple,  the post on its site came “from a third party vendor who partners on some finance and market pages on our site” and Boston.com yanked it after hearing about the problems. Wemple reported that Boston Globe editor Brian McGrory said this incident is curious because “the idea that we’d have a partner on our site is actually news to me.”

As with the Palin-Al Jazeera story, the Daily Currant’s original post includes a few red flags throughout the text to indicate the story is satire and not news. For example, a subhead on the story is “Cockroaches and Creditors.” And, the satirical story “quotes” Krugman” as saying he “thought maybe if I showed up in $70,000 Alexander Amosu suits” to the New York Times he’d get “ownership of part of the company.”

In a March 11 blog post for the New York Times, Krugman threw his two cents in on the satirical story. Krugman said he’s known about the Daily Currant story since March 8 and that he “decided not to post anything about it” because he “wanted to wait and see which right-wing media outlets would fall for the hoax.”

iMediaEthics has written to Breitbart.com’s website asking if it will post a correction. We also reached out to the Boston Globe’s McGrory asking more information about this “third party vendor who partners” on its website. We’ll update with any responses.