Why Paul Krugman is Wrong About Donald Trump's Polling Numbers

Why Paul Krugman Is Wrong About Donald Trump’s Polling Numbers 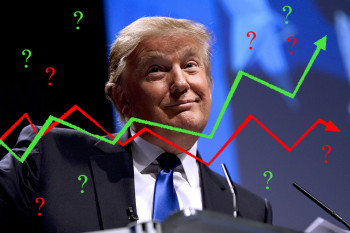 In a recent blogpost, Paul Krugman, New York Times columnist and Nobel Prize-winning economist, suggested that Donald Trump’s “bubble” probably won’t burst. Why? Because Trump has been leading in the polls for so long, current supporters will feel embarrassed to admit later that they were wrong:

“Now think about someone who has been supporting Trump since the summer. For the Trump bubble to burst, many people like that would have to slap their foreheads and say, ‘Wow, he’s not a serious person! What was I thinking?’ And very few people ever do that sort of thing.”

This argument is based on a faulty perception of what polls are telling us about the nomination race. But Krugman is not alone. Typically, journalists reporting on polls often reflect the same misperception.

It’s important to remember that most of the pre-election polls use a forced-choice question (no explicit option to say “unsure”), which pressures respondents to express support for a candidate, even if the respondent has not really thought much about the race.

This wording implicitly says to the respondent, “Even if you haven’t thought much about the election and it’s way too early for you to know who you might favor when it comes time to vote, please just give us your top-of-mind preference so we can report the results as though they represent what the voters at large are thinking.”

And most respondents do come up with an opinion for the poll. But remember: The vast majority of voters out there in the real world (as opposed to the few who are part of a poll sample) have not been pressed to come up with a choice for president “if the election were held today.”

They go blithely along their daily business, many paying no attention to the candidates’ campaigns at all, and of those who do follow the news, many not actually committing themselves to any one candidate so early in the season.

”If past nomination races are any guide, the vast majority of eventual Republican voters haven’t made up their minds yet.”

If Trump’s polling numbers begin to decline, that won’t mean – as Krugman suggests – that many people would be slapping their foreheads in embarrassment at having “supported” Trump for months and months.

Such a view of polls gives them too much credit for measuring the will of the public, when they are mostly measuring a momentary whim.

Why Paul Krugman Is Wrong About Donald Trump’s Polling Numbers