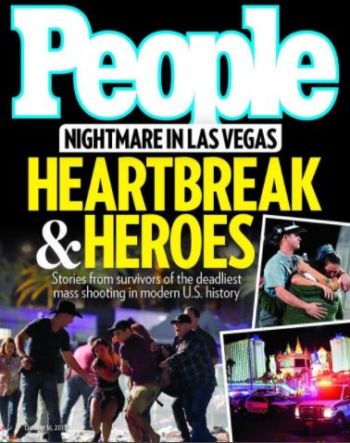 People magazine unpublished a profile of a man who was allegedly killed in the Las Vegas shooting earlier this month. Why? Because the man profiled, Larry Parra, wasn’t actually killed in the shooting. Further, the man may not even exist.

People will publish a correction in this week’s print issue. A People spokesperson told iMediaEthics by e-mail,

“In last week’s coverage of the mass shooting in Las Vegas, we included the story of a man named Larry Parra, who was reportedly killed during the attack. This story appears not to be true. We failed to properly check the information and vet the source. We apologize for the error, and have also removed the story from our website.”

Parra’s story was featured in the print edition of People. See below a picture of the print issue.

As news site Mic reported, the Clark County Coroner’s office in Las Vegas and news reports listing all of the victims of the shooting have no person with the last name of Parra or the first name of Larry or Lawrence. And People unpublished the story while it investigates. iMediaEthics has contacted the coroner’s office to confirm it has no record of a Larry Parra.

The People article was headlined, “Terminally Ill Man Celebrating 40th Birthday was killed in Las Vegas Shooting: ‘He was just amazing,’ says best friend.” The story claimed Parra was shot in the  head, quoting his best friend Jason Rogers as a witness. But, Mic searched Facebook and found that the man pictured by People as Parra appears to be a man named Steven Anderson, identified as Rogers’ husband. iMediaEthics has sent Facebook messages to both men to ask what happened.