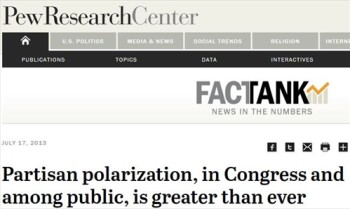 It’s not clear why Pew seems so intent on characterizing the American public as “polarized.” That is the message in the headline of the latest such Pew claim (“Partisan polarization, in Congress and among public, is greater than ever”). And that was the message in late 2003, when Pew issued a report with the title, “The 2004 Political Landscape: Evenly Divided and Increasingly Polarized.”

The 2004 report’s claim of an “increasingly polarized” public was eviscerated by Morris P. Fiorina and his colleagues in their book Culture War? The Myth of a Polarized America.*

“On the whole, the report was excellent, a highly informative summary of extensive surveys conducted between 1987 and 2003.

“But despite the claim embodied in the title, one strains to find evidence consistent with increasing polarization in the body of the report or in the myriad tables and figures that accompany the text.”  (emphasis added)

After going through the Pew tables and charts, the authors conclude (p. 66) that

“In sum…rather than indicating ‘further apart than ever,’ small increases in the size of opinion differences are intermixed with small decreases and numerous fluctuations without any real pattern.”

They add in a footnote, that rather that a subtitle of evenly divided and increasingly polarized, “Pew would done better to give its report the subtitle of an earlier report: ‘An Ambivalent Majority.’”

That Congress has become more polarized is not in dispute, but that doesn’t mean – as Pew argues – that “Congress reflects an America that has been growing further and further apart ideologically for decades.”

What is the evidence for this assertion? See the table below, courtesy of Pew:

The most telling change is the increase in the size of the green bars. The number of independents over the past thirteen years has increased from 28% in 2000 to 37% in 2012. That change by itself challenges the notion that Americans are growing ”further and further apart ideologically.”

Overall, then, there has been a slight decline in party identifiers (- 2 percentage points for Democrats and Republicans each), and a significant increase (+9 percentage points) for independents.

We can make the same calculations for liberals and moderates. (Because “moderate/liberal” Republicans are grouped together in the chart, for this exercise we can just divide those figures in half. When the numbers are uneven, we can give the “moderate” category the higher number.)

But suppose we compare 2008 with 2012.  Using the same calculations, we find liberals increasing by 2 percentage points (but only among independents), conservatives declining by one point, and moderates staying the same at 35%.

This is hardly the evidence for a claim that Americans are moving “further and further apart ideologically.”

No, what’s really notable here is not that there has been a discernible trend toward polarization, but rather that the figures have remained so consistent over the thirteen years. The only significant exception is the 9-point increase in independents, which suggests less – not greater — polarization.

Fiorina and his colleagues summarize their arguments (p. 77) against the notion of a polarized public:

“Reports of a culture war [driven by ideological polarization] are mostly wishful thinking and useful fund-raising strategies on the part of culture war guerrillas, abetted by a media driven by the need to make the dull and every day appear exciting and unprecedented.” (emphasis added)

We need to keep that caveat in mind the next time Pew and others in the press try to convince us the public is becoming more polarized. The claim is sensational, but hardly justified by the data.