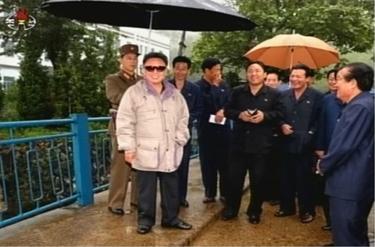 Bloggers suggest photos of the North Korean leader Kim Jong-il show him looking 20 pounds heavier on July 1 than photos taken in recent months. By July 8, one week later, he is dramatically thinner. Reuters reveals July 12 that Chinese and South Korean sources say Kim is suffering from Pancreatic cancer. Since the photo fakery most likely served as a propaganda tool to hide Kim's undisclosed illness, will the latest Reuter's report impact additional release of faked images of Kim?

Allegations that the North Korean leader’s political stunts include fake photos have intensified since last year’s stories about his serious illness. Now with new information regarding his illness, the speculation behind the charges of photo fakery is nearing verification.

July 12, Reuters reports that the North Korean leader is, in fact, ill with pancreatic cancer. They write, “South Korean broadcaster YTN said on Monday based on information gathered by Chinese and South Korean intelligence sources. Kim’s health is one of the most closely guarded secrets in the reclusive communist state. Kim, 67, was widely thought to have suffered a stroke last year, but there has never been official confirmation.”

The July 1 photos show a visit to a factory in Hamgyeongnam-do. Korea Beat remarks, “The Chosun finds it particularly hard to believe he was wearing his parka in the late June heat.” But the real evidence of the photo fakery is Kim’s full face and heavy appearance after being observed in other photos as very thin.

July 8, the Associated Press reports how “thin-looking” Kim Jong Il’s appearance is at a state event. Such a change in weight –from thin before July 1, to heavy on July 1st to thin again by July 8, certainly provides direct evidence supporting Kim watchers’ allegations that doctored images serve as propaganda intended to bolster false belief in the “dear leader’s” better health.

Commenter Ed Provencher writes about the July 1 photo, shown above: “That’s the biggest umbrella I’ve ever seen.” Han Bites Dog writes: “Parka or no, that umbrella must have been photoshopped.”