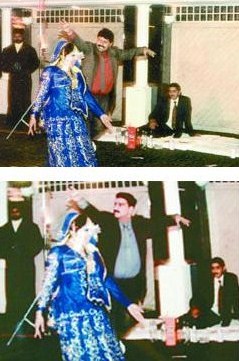 An Indian physician was imprisoned for doctoring the above photo that was ruled by Indian Courts as defamatory. The original (top) and the faked version (bottom). (Credit: Express News Service)

An Indian doctor was sentenced to two and a half years in prison for having “released” a doctored photo at a 2004 media conference of a police official, Express News Service reported. The doctored photo showed Varinder Kumar “dancing with some girls, holding a drink.”

Kumar stated in 2004: “My head has been affixed on the torso of another individual.” Kumar is a police commissioner and was at the time a Senior Superintendent of Police in Jalandhar, India. Dr Gurwinder Singh Samra released the doctored photo.

Express News Service elaborated on the differences between the photos. Express reported: “A variance in colour and tone of the two pictures is apparent. The photograph released by Kumar, which he claims is the original, shows a person wearing a red shirt and a grey tie. The photograph released by Samra shows the man who is dancing sporting a grey shirt and a grey tie. However, the placement of objects, and the gestures of the persons in the photographs look similar.”

According to India Express, the doctored photo was “retaliation” for Kumar’s having “registered” “a large number of cases” against Samra.  As Times of India reported, Kumar “had taken action against Samra on complaints of cheating against him.”

The doctored photo was first produced at an Aug. 9, 2004 press conference.  In the press conference, Samra accused Kumar “of amassing assets disproportionate to his known sources of income,” Express News Service reported at the time.

Samra went on to state that he “filed a defamation case against Jumar and claimed that judicial and police officers used to party at his hotels.”  As evidence, Samra showed the photos.  In response, Kumar denied the photos’ legitimacy and called them “Fake and doctored,” Express News Service reported.

In an Aug. 10, 2004 story, Express News Service reported that Kumar “produced what he called was ‘the original photograph” and again stated that Sumra’s photo was doctored.

iMediaEthics is sending out emails to see if we can get comments from Kumar and Samra or their representatives.