Plagiarism at the NYTimes? Paper responds, public editor weighs in

Plagiarism at the NYTimes? Newspaper responds, public editor weighs in 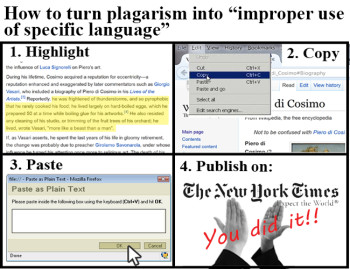 When is plagiarism not plagiarism? Apparently when you copy form Wikipedia and then publish it at the NY Times it is "improperly used specific language and details from a Wikipedia article without attribution" not plagiarism. Good to know. (Credit: iMediaEthics illustration)

The New York Times responded to plagiarism accusations against Carol Vogel, a staff member of 31 years, by adding an editor’s note to Vogel’s July 24 article, “A Renaissance Master Finally Gets a Showcase.” Times public editor Margaret Sullivan also tackled the matter in her blog.

Fishbowl NY’s Richard Horgan busted Vogel’s article on July 28 for lifting from Wikipedia. He posted a side-by-side comparison of Vogel’s lede with the Wikipedia page for painter Piero di Cosimo, which showed word-for-word copy and pasting.

Vogel’s copying and pasting “Thunderstorms and so pyrophobic” among other combinations of words, was a dead giveaway.

“He is said to have been terrified of thunderstorms and so pyrophobic that he rarely cooked his food, subsisting mostly on hard-boiled eggs that he prepared 50 at a time while heating glue for his art. He didn’t clean his studio. He didn’t trim the trees in his orchard. Giorgio Vasari, the Renaissance biographer, described Piero as living “more like a beast than a man.”

“Reportedly, he was frightened of thunderstorms, and so pyrophobic that he rarely cooked his food; he lived largely on hard-boiled eggs, which he prepared 50 at a time while boiling glue for his artworks. He also resisted any cleaning of his studio, or trimming of the fruit trees of his orchard; he lived, wrote Vasari, “more like a beast than a man.”

The Times added an editor’s note to the article July 30 acknowledging the problems and Fishbowl NY’s catch.

“The Inside Art column on July 25, about a planned exhibition of the works of the Renaissance painter Piero di Cosimo, started with a description of the artist’s life and eccentricities. That passage improperly used specific language and details from a Wikipedia article without attribution; it should not have been published in that form. (Editors learned of the problem after publication from a post on FishbowlNY.)”

Times public editor Margaret Sullivan also addressed the issue in her blogpost today, noting that “there’s no cover of darkness anymore for plagiarists.” She wrote:

“It seems to me that there can be little dispute about the claim, which was initially reported by MediaBistro’s FishbowlNY. Anyone can see the similarity. The question now is whether this is an isolated case or one of many instances. The Times is taking that question seriously.”

Sullivan argued that if this was one instance of plagiarism by Vogel, then she shouldn’t be fired but it “probably warrants a written warning or a short suspension.”

UPDATE: 7/31/2014 1:11 PM EST Times spokesperson Eileen Murphy is quoted by the Times as saying the newspaper isn’t “aware of any other problems like this” in Vogel’s work. “Editors have dealt with Carol on this issue,” she is quoted as saying.

Plagiarism at the NYTimes? Newspaper responds, public editor weighs in