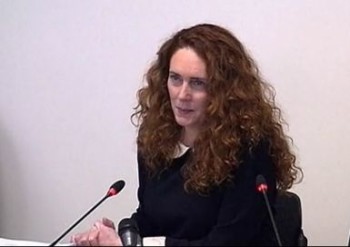 On May 15, the UK police charged Brooks “with concealing material from detectives, conspiring to remove boxes of archive records from Murdoch’s London headquarters, and hiding documents, computers, and other electronic equipment from the police,” according to Christian Science Monitor.

Specifically, the charges relate to July 6 to July 19, 2011, “the two weeks after” it was revealed that News of the World hacked the voicemail of Milly Dowler, a teenager who went missing and was later found murdered, the Los Angeles Times and Wall Street Journal reported.

Brooks’ husband was charged with two counts of “conspiracy to pervert the course of justice,” according to the New York Times.

According to the Los Angeles Times, yesterday’s charges against Brooks “are the most serious allegations of wrongdoing to emerge so far from the police investigations” into the press the past year.

Brooks and her husband issued a statement that “we deplore this weak and unjust decision.”  Individually, the Brooks also commented on the charges, according to the Guardian.

Charlie Brooks claimed Rebekah Brooks “is the subject of a witch hunt” and said “I am confident that the lack of evidence against me will be borne out in court, but I have grave doubts that my wife will ever get a fair trial, given the volume of biased commentary which she has been subject to.”

Rebekah Brooks said she is “baffled by the decision to charge me” and that the charges are “an expensive sideshow, and a waste of public money as a result of this weak and unjust decision.”