Did Politico Cartoon on Harvey, Texas Rescues Cross the Line?

Did Politico Cartoon of Texas Rescue during Harvey Cross the Line? 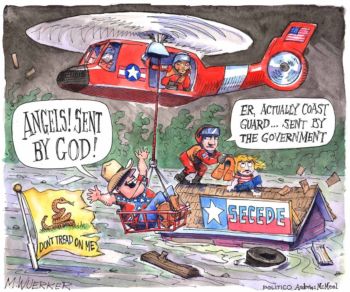 Politico has come under fire for its cartoon mocking Texas secessionists, religion, and Hurricane Harvey. The Politico cartoon, by Matt Wuerker, depicts the Coast Guard rescuing two people from the floods, with one of the people, a man wearing a Confederate flag T-shirt and cowboy hat, saying, “Angels! Sent by God!” with the rescuer saying, “Er, actually Coast Guard … sent by the government.” The cartoon shows a Texas secede sign on the roof of the house and a “Don’t Tread on Me” flag.

While the cartoon is still on Politico’s website, the tweet promoting it appears to have been deleted. Houston Chronicle education reporter Shelby Webb tweeted the cartoon “is a slap in the face to a group of people who are still reeling from unimaginable tragedy.” Criticism of the cartoon is trending on Twitter.

The Washington Post‘s Aaron Blake argued problems with the cartoon include its “crassness,” “stereotypes,” and “a needlessly vast oversimplification of a very complex issue at a very sensitive time.”

iMediaEthics has written to Politico and Wuerker to ask for a response to the criticism. We’ve also asked why the tweet was deleted.

2/ But we're not, and we're suffering. Ur cartoon is a slap in the face to a group of people who are still reeling from unimaginable tragedy

Wuerker responded to a few tweets, writing that his cartoon is “making fun of the Secessionist movement. Not at all aimed at all Texans.” He added that the cartoon is “very pro Coast Guard and doesn’t take away from all heroic private individuals who are also doing so many rescues.”

“Just trying to point out times like this we’re lucky to have rescue services,” he tweeted. “Don’t see how this takes away from private individuals heroism.”

Just trying to point out times like this we're lucky to have rescue services. Don't see how this takes away from private individuals heroism https://t.co/Tk4xCqyV0v

Respectfully— it's making fun of the Secessionist movement. Not at all aimed at all Texans. https://t.co/aI4RxRNjFm

In a statement to the Washington Examiner, Wuerker defended the cartoon as a general commentary on Texas secessionists.

“As a political cartoonist, I try to get people to think – to consider the ironies and subtleties of the world we live in. This cartoon went with an extreme example of anti-government types – Texas Secessionists – benefiting from the heroism of federal government rescuers,” he is quoted as saying. “It of course was not aimed at Texans in general, any more than a cartoon about extremists marching in Charlottesville could be construed as a poke at all Virginians,” he added. “My heart is with all the victims of Hurricane Harvey’s destruction and those risking their lives to save others.”

Did Politico Cartoon of Texas Rescue during Harvey Cross the Line?