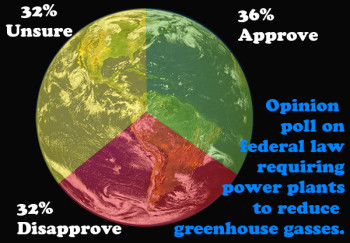 An announcement this week from an environmental group claims that “about 80 percent of people in both red and blue districts believe that global warming is real and that we should be doing more to fight it.” Other recent polls by Quinnipiac, NBC/Wall Street Journal, and ABC/Washington Post also claim to show a highly engaged public wanting the government to reduce carbon emissions that cause global warming.

But a new Pittsburgh Post-Gazette/iMediaEthics poll suggests a much less involved public, with only one in five Americans following the issue very closely, and about half not caring whether the government takes action or not.

The survey of 1,000 respondents, conducted by Princeton Survey Research Associates International (PSRAI) July 17-20, also shows how some polls, using biased question wording, can produce the illusion of a highly opinionated and informed public.

These figures show how misleading are polls that suggest anywhere from 90 to 95 percent of Americans have fixed views about climate change. Those higher figures are obtained only because most pollsters pressure respondents to come up with opinions, even if they haven’t given the issue much thought. And, as the figures above show, a large proportion of the public is unengaged.

Only 36 percent of respondents in the Post-Gazette/iMediaEthics poll say they would approve of the federal government requiring power plants to reduce greenhouse gases “even if it would mean higher utility bills for consumers,” while 32 percent are opposed, and an equal number say they are unsure.

These poll results conflict not only with the other media polls cited above, but also with EcoWatch.com, citing a study from the Program for Public Consultation, that the vast majority of Americans want the government to address the issue of global warming. This view of the public was based on a poll that frequently referred to the “problem of climate change” and then asked whether the government was doing enough to deal with that problem (just over a majority said no), and then whether the government had a responsibility to do so (that’s where the 80 percent figure was obtained).

At best, those two questions are so vague they hardly indicate what precisely the government ought to do. More important, they are phrased to tell the respondents that climate change is a “problem” and that the respondents should take sides on an issue, whether or not they have thought much about it. Once the respondents have been “informed” of the problem, they no longer represent the larger population, which has not been informed in the same way.

A poll sample is intended to be a representative subset of the American adult population, but once respondents have been given one-sided information, they lose their representative character. We cannot treat the results of such polls as indicative of what the overall public is thinking.

The media polls that show a clear majority of Americans favoring government intervention to deal with global warming also bias the results by the question wording. A recent Quinnipiac poll, for example, asked: “In an effort to reduce global warming, do you think the federal government should limit the release of greenhouse gases from existing power plants, or don’t you think so?” The results showed a 58 percent to 30 percent margin of support.

Note that the question itself tells people there is global warming, and that it’s a problem that has to be “reduced.” The question then uses a “forced-choice” format (giving no explicit option for respondents to admit they don’t know much about the issue) to pressure respondents to give a response.

When questions are framed in this format, people who don’t know much about the issue will tend to give a positive rather than a negative response. The higher level of support among respondents found by Quinnipiac is largely created by question wording, but does not indicate a public that is genuinely engaged in the issue.

In the Post-Gazette/iMediaEthics poll, by contrast, the question on possible government intervention did not tell the respondent there was global warming, and it explicitly offered the respondent an opportunity to decline to answer: “Would you approve or disapprove of the Federal Government requiring power plants to reduce greenhouse gases, even if it would mean higher utility bills for consumers, or are you unsure?”

When people are given an unbiased question, and an opportunity to admit they aren’t sure about an issue, many will do so. That’s how the Post-Gazette/iMediaEthics poll found so many people unsure about the issue.

Even then, as shown earlier in this article, many respondents will express an opinion and then immediately admit they would be fine no matter which action was taken. Thus, it’s important to allow people both to admit they don’t know about an issue, and – for  those who do express a view – to indicate how intensely they feel about it (whether they really care if their view prevails or not). Otherwise, the poll results can give a misleading impression about a more engaged public than what is the actual case.

Impact of Referring to the Obama Administration

To test the impact of question wording, the Post-Gazette/iMediaEthics poll asked half the sample about the “federal government” taking action, as described earlier, while the other half of the sample was asked about the “Obama administration” making the demand.

Using the president’s name produced a margin of support more than three times larger than what was obtained when his name was not mentioned: 42 percent approved and 28 percent disapproved, a 14-point margin, compared to the 4-point margin in the other question wording.

Still, in a follow-up question, many respondents immediately acknowledged they wouldn’t be upset if the opposite happened to what they had just said. The net result: 30 percent of Americans strongly favored the Obama administration trying to curb greenhouse gases, 22 percent strongly opposed the idea – with the rest not caring one way or the other.

While the margin is more positive when Obama’s name is mentioned, either question wording shows about half the public unengaged on the issue.

Perceptions of Climate Change and the Scientific Consensus

One reason for the differences in results between this poll and others is that many Americans are uncertain about the impact of climate change. And our poll allows them to admit their uncertainty. Other polls often treat the “problem” of climate change as a given, thus rolling over what the public is really thinking.

Given the reality of a public with so much uncertainty about man-made climate change (if the polls are willing to measure it), it’s clear that there is not – at least right now – a strong public demand for government action. Many people still need to be convinced of the existence of a problem with the climate.

Another question in the poll shows how unaware people are of the scientific consensus on the issue of climate change. While the vast majority of scientists who deal with climate-related issues, and virtually all scientific organizations, agree that climate change is a man-made problem that needs to be addressed, more than half the public is unaware of this consensus.

Just 41 percent of Americans are confident that “most scientists agree that climate change is happening now, caused mainly by human activities,” while 18 percent firmly believe “there is little agreement among scientists” on the issue, and the rest (41 percent) are unsure.

Contrary to the illusion offered by many polls, a majority of Americans is not convinced that climate change is a problem that requires government action. At least a third of Americans have very little engagement in the issue, and up to half or more don’t have a strong view one way or the other about potential government action to address the issue.

That is not an encouraging picture for environmental leaders who would like to point to a public that recognizes the problem of climate change and demands appropriate action now. But it is a more realistic picture than the one provided by most polls, which – however well-intentioned – manipulate respondents into giving answers that sound positive but don’t represent the views of the larger population.

This poll was commissioned by iMediaEthics and the Pittsburgh Post-Gazette. Read the Post-Gazette’s news story on the poll and an opinion piece by David Moore.