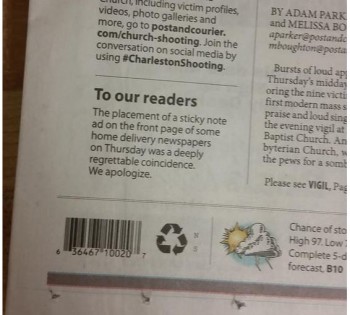 The Post and Courier apologized in print today for a gun ad. (Photo Credit: iMediaEthics/Sydney Smith)

The Charleston Post and Courier newspaper apologized for a gun ad on its front page yesterday atop its coverage of the mass shootings at Mother Emanuel AME Church.

Nine people were killed at the historic black church in downtown Charleston on June 17. Suspect Dylann Roof was arrested yesterday and charged with nine counts of murder today.

Dylann Roof bond hearing @ 2 pm today charged with 9 counts of murder & poss of a firearm during the commission of a violent crime.

The Post and Courier apologized in print today and online yesterday for the ad, which was a sticker posted on top of the paper’s front page, just above the headline “Church attack kills 9.” Yesterday’s print edition of the Post and Courier included a gun ad sticker atop its coverage of the Charleston shootings.

Today’s print apology on the front page reads: “To our readers: The placement of a sticky note ad on the front page of some home delivery newspapers on Thursday was a deeply regrettable coincidence. We apologize.”