'The Post': A Must-See for Veteran and Student Journalists - iMediaEthics

‘The Post’: A Must-See for Veteran and Student Journalists 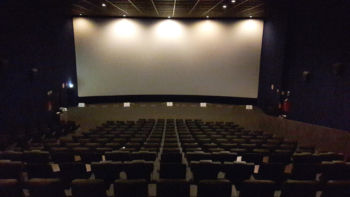 After my own bout with the flu, I waited a bit before working up the courage to finally go to the theater to see The Post. The only other people there risking disease were what appeared to be a high school class, attending a Monday matinee.

If you have not yet seen it, I implore you to do so. If you’re an academic, you must make sure your students see it, by brute force if necessary. You might have to wait until it’s available for streaming, but have them see it. I hosted a showing of Spotlight at my house for members of our SPJ chapter, luring them with free food and beer. They mustn’t think it’s for the acquisition of knowledge.

Naturally, I had an overall favorable impression of the film, not just because of Steven Spielberg’s direction and Tom Hanks’ and Meryl Streep’s performances as Ben Bradlee and Katharine Graham [executive editor and publisher of the Washington Post, respectively, but because I’m a journalist and because I remember those events vividly.

The current generation of journalists knows, or is supposed to know, about the Pentagon Papers vicariously through their media law courses. It’s one of the landmark cases, along with Near vs. Minnesota, that protects the press from prior restraint. But to refresh your memories in case you haven’t yet seen Hollywood’s account, a researcher at the RAND Corp., Daniel Ellsberg, became disenchanted with the Vietnam War and how successive presidential administrations had deceived the public into believing the war was winnable.

He stole thousands of pages of a top secret study RAND had prepared for the Pentagon, copied them, and had them delivered to the New York Times. The first two installments, written by Neil Sheehan, ran in June 1971. Then the government slapped the Times with an injunction against further publication, whereupon it fell upon the Washington Post to grab the baton.

One scene I especially enjoyed was how that baton was passed. A young woman carrying a box walks into the Post newsroom [imagine that today!]. She approaches a man hammering on his typewriter and says, “Excuse me, are you important?”

“I’m a general assignments reporter,” he tells her.

She drops the box, containing the purloined papers, on his typewriter and rushes out.

I also silently cheered during the scene of the stockholders’ meeting, where Streep/Graham stands firm on a share price of $24 for the IPO instead of $27, a difference of $3 million, because the Washington Post could hire 25 reporters for that $3 million and thus enhance the newspaper’s quality. Imagine that happening at a Gannett stockholders’ meeting!

An issue discussed in the movie that remains relevant today is the conflict of interest when journalists become too friendly with the people they have to cover. When the word gets out that the Times is about to break the Pentagon Papers story, former Secretary of Defense Robert McNamara [played by Bruce Greenwood, who, ironically, played JFK in Thirteen Days], pressures his friend Graham to try to play down the story. Bradlee admonishes her not to let friendship interfere with her duties as a publisher. She counterattacks by reminding Bradlee of his own cozy friendship with JFK, the parties he was invited to and their excursions on the presidential yacht. “I never pulled any punches,” Bradlee insists. “Didn’t you?” Graham shoots back. “Hard to believe you got all those invitations without pulling a few punches,” leaving Bradlee looking quite sheepish. [In reality, Philip and Katharine Graham were also buddy-buddy with the Kennedys.]

The historical aspects, including the technological ones, were obviously well researched, something that also impressed my former reporter/retired lawyer brother:

“The story line is OK but what I liked best is the authenticity of props and scenery, such as a Linotype machine (modified for effect), print shop with type being fitted into a chase, press room (where did they film that?), banks of pay phones, rotary desk phones, a real-looking fake SCOTUS courtroom, cars, newsroom furniture, military uniforms, and many other details. It must have cost a mint to make this one.”

My one substantive criticism is Spielberg’s awkward attempt to deviate from the central focus of the film to make it some kind of feminist statement about how poor Katharine valiantly overcame all that male condescension and bad legal advice. To my surprise, two female colleagues who saw it had the same complaint.

One told me the scene where young women accost Graham at the Supreme Court to gush their admiration for her and tell her how she’s inspiring them “was a bit over the top. I thought I was going to gag. Like all those high school-aged girls really knew who Katharine Graham was and why she was at the Supreme Court.” The other wondered whether the movie focused on The Post rather than The Times solely because it had a female publisher.

Graham duly earned her place as a journalistic icon, irrelevant to gender. The movie implies, however, that Graham had only recently become a widow and was floundering in her new role as publisher. The movie never explains that her husband Philip Graham had died by suicide by shotgun in 1963, fully eight years before. By the time she had to grapple with publishing the Pentagon Papers, Graham was far from the bumbling amateur lacking self-confidence that Streep portrays.

Also, at the end of the film, Streep/Graham perpetuates the myth that Philip Graham coined the expression that “journalism is the first rough draft of history.” That’s what I’d always heard, too, but a few months ago I learned that although Philip Graham did use it in a speech, it originated several years earlier from one of his editorial writers, Alan Barth. The correct quote is, “News is only the first rough draft of history.”

Now you know, too. You’re welcome.

So, like all historical films, The Post has its flaws. Nevertheless, coming so close on the heels of Spotlight, it may help again to instill in the viewing public, at a time when we have a president who excoriates the media for spreading “fake news,” an appreciation for what a vital role a free press plays in our democracy.

Dare we hope? Well, I made a point of asking those kids as we filed out of the theater if they liked it.

“A long life in journalism convinced me many presidents ago that there should be a large air space between a journalist and the head of a state.”
—Walter Lippmann (1889-1974)
Pulitzer Prize-winning American journalist, columnist and author

“Journalists thrive on not knowing exactly what the future holds. That’s part of the excitement. Something interesting, something important, will happen somewhere, as sure as God made sour apples, and a good aggressive newspaper will become part of that something.”
—Ben Bradlee (1921-2014)
American journalist, author and editor of The Washington Post

“In Hollywood the woods are full of people that learned to write but evidently can’t read. If they could read their stuff, they’d stop writing.”
—Will Rogers (1879-1935)
American cowboy, actor, humorist and newspaper columnist

‘The Post’: A Must-See for Veteran and Student Journalists