The newspaper “cut ties” with Courson after the column, the Sacramento Bee reported.

Courson is a freelance writer and her column responded to the fatal shooting of Stephon Clark, according to Newsweek, which noted her column said in part:

“In Stephon’s situation, the cell phone he carried looked like a small black gun. Police have to be careful not to overreact and you black men might be better off at home after a certain hour.”

“So we need to ask ourselves before overreacting or advocating reduction of these shootings — Do we really understand why a shooting occurred?”

“We must not immediately assume that a policeman has no reason to confront a suspect.”

Now, her publisher, Dave Herburger, has apologized, calling the column “the definition of tone deaf on this issue,” Sacramento’s CBS-affiliate reported. Herburger told the Sacramento Bee, “Had I read the proofs prior to publication, I would have been able to avoid all this.” Herburger added that he plans to publish 10-12 letters to the editor in place of the column and that Coulson was “very apologetic” for her column.

iMediaEthics left a voicemail for Herburger. Courson doesn’t appear to have any social media presence.

In a statement to RanchoMurieta.com, Courson said “Rather than sounding biased, I should have chosen better words to express my frustration about our inability to find ways to prevent the violence that occurs on streets in these neighborhoods.”

She apologized for her comments, adding, “I am sad that a seemingly negative, hateful column drew so much attention. You have no idea how I had hoped for even a little attention at times when columns were about worthy local issues and causes.” 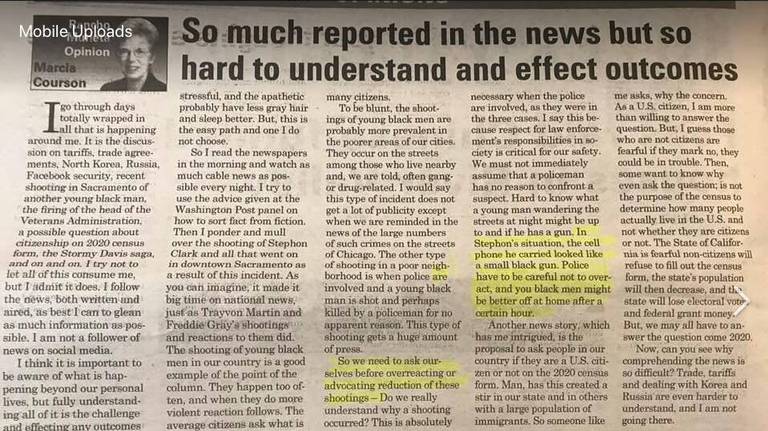 A copy of the print edition of the column (Credit: River Valley Times via Sacramento Bee)